Versailles Treasures From the Palace

I've visited the Palace of Versailles quite a number of times. On my first trip to France in 1998 we loved Versailles so much that we went back several times. At that time the fountains only ran on a Sunday afternoon so we had to go back to see them in operation. We even spent our last night in France staying in Versailles, the town, not the palace sadly, and had a magnificent dinner at a restaurant overlooking the palace gardens.

I returned to Versailles in 2010 and again in 2013. But Versailles is so vast that there are still areas I haven't been to as yet, and it's a magnificent spectacle each time. Each visit is equally memorable and  there's always something different, and I'd still like to go back to see more.

So last year as soon as I saw an ad for Versailles Treasures From The Palace at the National Gallery of Australia in Canberra, I did a sharp intake of air and knew that I would be going. What I didn't realise then was that it would turn into a family road trip to celebrate a special birthday, but I'm so glad that it did. Most of us had been to Versailles before in 2010 and 2013 and so it was special for all of us. The exhibition is magnificent and we had a great weekend of celebrations as well.

It's a beautiful exhibition. Breathtaking from the very first things you see.

This was an amazing rug from the passage way between The Louvre (back when it was a royal palace) and The Tuileries (back when it was a palace). Huge and spectacular, this was just one rug of 93 carpets made to line the Grand Galerie linking the two palaces. They were never used though and remain in beautiful condition.

The French love a reliquary.


There were even sections of parquetry from Versailles! Who would think of ripping up the floor boards?

Even functional household objects got the Versailles treatment.


There are several rooms that celebrate the magnificent gardens of Versailles. The engineering and plumbing innovations that had to be done to create the fountains that are still unrivalled anywhere else in the world with 17th century equipment and knowledge is incredible. There is a interesting short video displayed as well as artefacts, paintings and recreations of the gardens and fountains- it's an innovative and beautifully displayed.

I've long held the notion that anything can be art if it's displayed just so.


One of my favourite part of the exhibition was a recreation of The Labyrinth that was installed in the gardens in the 17th century. I'd never heard of the labyrinth before, perhaps not surprisingly as it was taken down in 1774 and replaced with the Queen's Garden.

Originally conceived by André Le Nôtre in 1665 as an undecorated maze, the crossroads of each path were furnished in the 1670s with 39 fountains decorated with 330 painted lead animals illustrating classical parables. These new additions were inspired by the publication of Jean de La Fontain's Fables 1668, dedicated to Louis XIV's six-year-old heir.

Only 35 animals have survived, and there were four or five presented here in a reimagined maze.


Much was made in the press before the exhibition about the inclusion of this magnificent sculpture. And rightly so, just getting Latona and her children to Australia was a tremendous undertaking. The statue had to be broken up for transport. But then to see it in place in the exhibition was astonishing. It was surrounded by a gorgeous audiovisual experience to recreate the experience of seeing the fountains at Versailles. It certainly did. I was moved to tears and sat watching it for some time.


There was so much fascinating detail and objects that you don't see on a visit to Versailles.

I was particularly keen on this trio of jam pots. 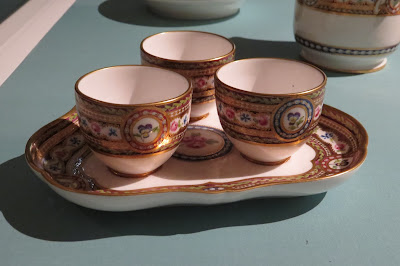 Versailles Treasures From the Palace is on at the National Gallery of Australia until April 17.
I might just go back. And as a member of NGA I already have my golden ticket... If for no other reason than that I totally missed the orange blossom perfume.

How delightful!
It looks like the exhibition was the next best thing :-)

Wonderful exhibition! And I agree that anything can be art if displayed creatively. Thanks for sharing, and here's MY SATURDAY SNAPSHOT POST

What a fantastic exhibit! I've never been to Versailles but would love to visit. It sounds like this exhibition provided a tantalizing taste of Versailles's beauty. I hope you're able to go back and see it again.

Looks like a great exhibit. I took my dad last year-it was so crowded you could not move. He did not really enjoy it-truth be told. He liked the gardens as we were not like sardines.

The exhibition is breathtaking! I visited Versailles years ago and enjoyed it, but also found it overwhelming because there was so much to see. Your post of highlights gave me renewed appreciation.

Wow, Louise. You've certainly piqued my interest in Versailles again. Isn't it funny how different parts of France capture different people? Versailles always overwhelmed me. I think I've been four times, bu I might enjoy seeing the displays in a different setting, like you did. Maybe I'll visit the gardens again so I can enjoy them as much as you did.
One place that I visit over and over again when I'm in Paris, is St. Chapelle, perhaps a polar opposite to Versailles.
Thanks for playing along with Dreaming of France. Here’s my Dreaming of France meme

We only had time for the gardens, but we did go on Sunday afternoon and did spend the whole afternoon outside.

I'm astonished at the beauty of each object. Next life we need to come back as queens, Louse. In France, of course.