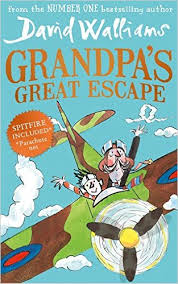 David Walliams is certainly leading the charge of the comedians who are the new children's writers. He published his first book for kids The Boy in The Dress (see my review) in 2008, and he has released a best selling book each year since. I didn't read any til 2013, but have now caught up and can sneak in a quick read of his latest each year when it is released. Although they do seem to be getting bigger each year. Grandpa's Great Escape is a bit of a brick and comes in at 461 pages.

Grandpa's Great Escape is rather unusual, even amongst the Walliams books. It is the story of 12 year old Jack and his grandfather. Jack's grandfather is dementing, and his behaviours are becoming increasingly erratic.

One day Grandpa began to forget things. It was little things at first. The old man would make himself a cup of tea and forget to drink it. Before long he would have lined up a dozen cups of cold tea on his kitchen table. Or he would run a bath and forget to turn off the taps, flooding his neighbour's flat downstairs. Or he would leave the house with the express purpose of buying a stamp, but return home with seventeen boxes of cornflakes. Grandpa didn't even like cornflakes.


Jack and his grandfather get along famously. Jack loves to hear his grandfather's tales of adventure when he was an RAF pilot during the Second World War. They share the stories, reenact the battles, and form a truly special bond.

The boy couldn't help but smile. Everyone else always saw Grandpa's condition as a problem. For Jack, the way his grandfather's mind worked was nothing short of magical.


But things get difficult after Grandpa recreates a few too many of Wing Commander Bunting's exploits. The police take an interest, and Grandpa faces the reality of going into a Nursing Home. Naturally the local nursing home, Twilight Towers, is not a nice place, run by Miss Swine, the Matron, and an odd assortment of rather hairy, tattoed nurses. A rather odd premise for a children's book, but it does work. Part 2 is the most exciting. And of course most of the adults don't come off all that well.

An extremely large security guard was looking up at him. It was like the museum had captured the biggest gorilla in the jungle, stuffed it not a uniform and placed a peaked cap on its head. Thick tufts of black hair sprouted from his nose, neck and ears.


Jack's parents are naturally a bit clueless and it is up to Jack and his grandfather to save the day. It's a shame we all have a year to wait for the next fun Walliams story.
Posted by Louise at 09:30

I haven't seen this author in America yet. Hope he makes it here soon.