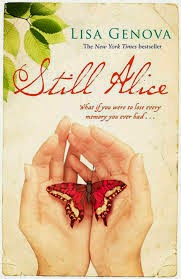 I don't think it's any great secret that Still Alice is about one woman's journey into early onset dementia. Alice Howland is at the top of her game, a respected Professor of Psychology specialising in psycholinguistics, she has spent the summer travelling, delivering lectures and keynote addresses, she is fit, a runner, with a successful family- a loving husband, three intelligent, capable children.

Alice is just about to turn 50 when we meet her, and she is having trouble with her memory. Forgetting the occasional word in a lecture-lexicon. Getting lost while doing her usual run. Her diagnosis takes a while, but then faces the problem of how to tell her husband, her family, her colleagues.


Naturally Alice worries about her future.

But at some point, she would forget how to eat an ice-cream cone, how to tie her shoe, and how to walk. At some point, her pleasure neurons would become corrupted by an onslaught of aggregating amyloid, and she'd no longer be capable of enjoying the things she loved. At some point, there would simply be no point.


And if she'll get through her TBR.

She thought about the books she'd always wanted to read, the ones adorning the top shelf in her bedroom, the ones she figured she'd have time for later. Moby-Dick.


But you don't need a terminal illness to worry about your TBR and how you'll ever get through it. Or enough of it.

Lisa Genova is a neuroscientist herself. She watched her mother wither away from Alzheimer's in her eighties. Still Alice was self published in 2007 before being picked up by Simon and Schuster, and going on to be sold in 30 countries, and being translated into more than 20 languages. That's quite a publishing success story.


I'm not quite sure why I was so desperate to read Still Alice, but I made time in my busy schedule- before the movie comes out here, and I enjoyed it- it's a moving, thought provoking read.

There have been quite a few media articles in the past few days about young people with Alzheimer's. Or perhaps I just paid more attention to them. A moving piece in the Guardian from a daughter watching her mother's dementing illness. And Australia's Anne Deveson has also been diagnosed with Alzheimer's Disease. She says


I am not Alzheimer's. I am myself.

A sentiment that Alice could only agree with.
Posted by Louise at 10:21

An important topic for sure.

My husband's people all had it, so I'm constantly watching for it. Silly, I suppose.