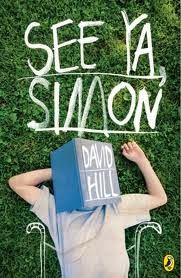 I always mean to read more Kiwi books than I do- actually I could leave Kiwi out of that sentence and it would still be true. Each February though I celebrate Waitangi Day with a NZ 1001 book. There's been some cracking reads so far. I am Not Esther. Under the Mountain. The Whale Rider. And now See Ya, Simon is added to that glowing list.

See Ya, Simon is a challenging book. Simon is 14 and has Muscular Dystrophy. He is wheelchair bound and everyone expects that he will die in the next year or so. Cheery stuff. See Ya, Simon is narrated by Simon's best friend Nathan. Through Nathan's eyes we see Simon declining- needing to be rolled over in bed, becoming thinner and frailer each month, not being able to throw the dice in their role-playing games each weekend. We see the inevitable coming.

But See Ya, Simon is not a one dimensional dissertation in misery. Nathan has his own problems too, his parents have separated, his little sister is annoying, he has to walk the dog and he can't work out how to talk to girls. David Hill employs an incredibly light touch in this moving, rather incredible book. There is much humour and fun to be had, Simon is particularly funny, and deals with his illness in a most upfront way. We the readers need that humour.

I'll be interested to read more of David Hill's books. He is a rather prolific New Zealand author and journalist. He was a high school teacher for 14 years before becoming an author in the early 90s. See Ya, Simon was his first book published, and one of the books that he is most proud of.

The very first one of my novels called See Ya, Simon was important to me because it proved to me that I could write a novel. That is a story that began with the death of my daughter's best friend in high school and it made me aware of the resilience, and the depth, of adolescent lives. Source.


I hadn't meant to read two books back to back about people dealing with progressive, debilitating neurological disease, but sometimes synchronicity deals the reading cards that way. And both Still Alice and See Ya, Simon are engrossing, thought provoking reads.
Posted by Louise at 08:24

I'm not sure I can read Still Alice. It scares me too much. This one sounds sad, but more like something I can handle.