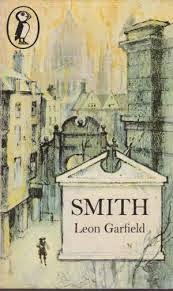 The books we read for my 1001 quest continue to surprise and amaze me. There are some unexpectedly intriguing books. Smith is not a typical kids book. I'd wondered about it since I first saw the rather drab and grim cover. I hadn't really heard of the book, or the author Leon Garfield before. Every book is a journey of discovery.

It turns out this book is actually rather drab and miserable in some ways. Smith is the tale of a ragamuffin boy seeking out his existence in 18th century London. Smith is a pickpocket who lives with his two older sisters in the basement of a rather disreputable pub. Smith's sisters make their living refashioning clothes taken from those unfortunates who met with the gallows. It is all rather grim. I'm not sure how I would have reacted to this book when I was a teenager, but I quite enjoyed it now- I know enough of Dickens to make it familiar, (although Dickens was writing 100 years after Smith is set), and I like that the setting is the area around St Paul's - we stayed very close to St Paul's when we visited London in 2013- although I'm glad to say that the area is vastly improved since Smith walked the streets.


Here, the houses reared and clustered as if to shut out the sky, and so promoted the growth of the flat, pale and unhealthy moon-faces of the clerks and scriveners, glimpsed in their dark caves through busy windows, silent and intent.

In the first few pages Smith witnesses a murder- of a gentleman that he has just pickpocketed moments before.  It’s not all that often that murder is a topic for a children’s book.


His eyes flickered with pain at the knife’s quick prick. Then he looked surprised - amazed, even - as he felt the cold blade slip into his warm heart.


Although I did just read a recent Australian book Withering-by-Sea which had a very similar start. A murder witnessed, and something of value found which then puts the finder in grave danger. Smith has inadvertently robbed the gentleman of something quite valuable, and then the two men in brown are after Smith too. Smith is a rather unlikely hero.


’Not old Smith?’ he’d said, with a shrug and a grin. ’Not grubby little Smith? Thieving Smith, Smith o’ the doorways and corners? Smith o’ the stinking Red Lion?’


Leon Garfield masterfully injects quite a bit of humour into this rather dark tale.

Here the housekeeper- a single lady with a complexion midway between a lemon and a turnip - muttered,


His first manuscript for Jack Holborn (1964), the dramatic story of eighteenth- century piracy, was submitted as an adult novel, but the publishers thought it had a better chance as a children's book. Although his stories are often centred on children, as in Jack Holborn, or Tolly Smith, the boy with the travelling fair in Black Jack (1968), Garfield's are not books that have any other specifically childish ingredients. He himself said, 'Really what I try to write is that old-fashioned thing the family, novel, accessible to the twelve year old and readable by his elders.' (Quote from Beatrix Potter to Harry Potter, Portraits of Children's Writers by Julia Eccleshare)

I do think Leon Garfield has achieved that ambition. I’m often confused why just because the central character is young then the book is seen as a children’s or YA book, this is often not the case at all. I wonder if family novels exist anymore? Or is that what we are seeing with the large adult readership of YA?


In a beautiful moment of synchronicity you don't just have to take my suggestion to have a look at Smith. The fabulous Eoin Colfer posted this rather funny video on youtube this week, the second in an occasional series, recommending Smith.

Curiously I was thinking about the demise of the family novel recently too, when discussing Anne of Green Gables and Little Women on another blog.
It seems like too big a leap to put Hunger Games into that same category!

I kind of like the cover with the architectural features, but I wouldn't have guessed it was a kids book! I hadn't heard about this author, so thanks for letting me know about him.

It's been a long while since I last saw a Puffin book. This one has a beautiful cover, the story reminds me of Oliver Twist. So you're right, Oliver Twist is about a child, and a whole bunch of other ones too, but it's definitely not a children's book.