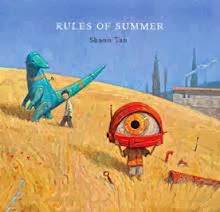 Rules of Summer was actually one of the very first books that I read that was later nominated for the CBCA Books of the Year 2014. I saw this book in the shops before I first saw any reviews anywhere, and was of course immediately drawn to it, as I am drawn to any other Shaun Tan work. For a while then it was everywhere. Jennifer Byrne on Tuesday Book Club Dec 2013 edition proclaimed it "surreal for adults, delightful for children, a joy of a thing". Stephen Romei featured it in The Australian's Hot Reads for Summer 2013.

His new one, the beautiful, haunting picture book Rules of Summer, which says so much with so few words, is one of the standout books of the year, full stop.


I bought it. I read it. A few times. And I don't think I quite understood it. I didn't know what to say, and so was reluctant to blog about it. I didn't immediately love it, and I've loved and admired Shaun Tan for some time. I wanted to like it, and I didn't want to be disappointed with a Shaun Tan book. So I let this post slip away unwritten, and left Rules of Summer on the shelf. I blogged about every other book shortlisted for the CBCA Picture Book of the Year 2014. And then last month Rules of Summer won Picture Book of the Year. Clearly it was time to look at this  book again.

And I still didn't understand it! I reread it several times once more. I needed to find the Teachers Guide and Shaun Tan explaining the book to me on youtube for help.


In the video Shaun tells us that he likes mysterious imagery, and that in Rules of Summer we're left with "a bit of a puzzle to what is exactly happening". He likes it to be not entirely clear as to what is going on and he leaves it to the readers imagination to construct what is going on. Perhaps this is where I'm failing? Rules of Summer is open to being read in all sorts of ways, that it does not have a linear or kinetic structure.

This is the sort of book you could open on any page and spend five minutes or an hour pondering the image. Close the book, and that would be sufficient experience.


I love hearing about his creative process in the video. He doodles and draws, without worrying about meaning or content, and later spools out random ideas, like free association or daydreaming. And I come to realise why I'm not a creative person- my mind just doesn't work like that. I still admire Shaun Tan enormously and will avidly seek out his next book, it's just that Rules of Summer didn't strike a chord with me as clearly it did for many other readers.
Posted by Louise at 08:08