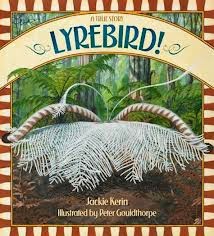 Having a rather keen interest in birds I was obviously intrigued by this title when I saw it on the CBCA  Shortlist for Eve Pownall Book of the Year 2013. It took me a while to get hold of it. The winners have already been announced, and Lyrebird! was an Honour Book this year.

Lyrebird! tells the extraordinary tale of a surprising friendship between a male lyrebird and a widow named Edith Wilkinson. Edith lived in the Dandenongs, east of Melbourne in the 1930s, and made her living growing flowers. One day a male lyrebird visited her and put on quite a show on her verandah. She called him James, and he was to become a frequent visitor. 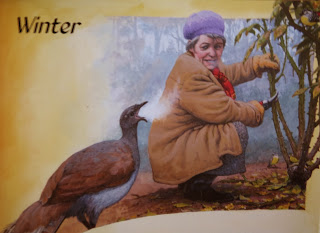 Lyrebird! had it's origins when Jackie Kerin's partner borrowed a 1933 book called Lore of the Lyrebird, written by the marvellously titled Ambrose Goddard Hesketh Pratt, solicitor, journalist and President of the Royal Zoological and Acclimatization Society. James became quite famous in his day, and was one of the first lyrebirds ever to be filmed and recorded. Jackie became more and more excited by the story. You can hear Jackie talking about Lyrebird! on Radio National here. The book was published by Museum Victoria. It's beautifully illustrated by Peter Gouldthorpe. 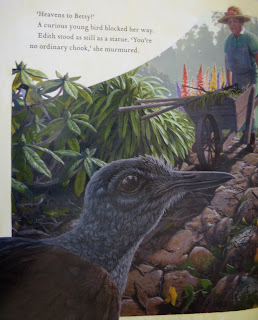 Lyrebird! has also been made into a beautiful short movie. For some reason I can't embed it, but I can link to it here. Somewhat intriguingly the film version has a lovely rhyming verse form that the book doesn't have. I'm not sure why. It would have made it a great read aloud book for little kids. The book format is more of an informative type for older children. Peter Gouldthorpe has wisely hidden lots of other birds throughout his illustrations to add interest- kids so love searching for hidden things in books. 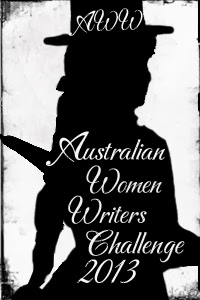 I preferred the illustrations over the story in this one. I also found a youtube version that read aloud better.
(To embed the video you need to click on the html tab when you're drafting your post).

Another new-to-me book. Why does it take so long for great books to reach us in the US?