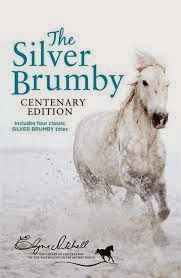 I'm so glad to have finally read this classic Australian book, it's a crying shame that I hadn't read it before. I really wish I had read it when I was going through my horse mad preadolescence though, I'm sure it would have become a cherished childhood memory. Reading it now, it's still an enjoyable, rather thrilling story, and I can definitely see why it is such a beloved favourite for many people, especially those lucky enough to read it in their own childhoods.

The Silver Brumby tells the story of Thowra, a magnificent silver foal born to Bel Bel at the start of the book. Bel Bel teaches Thowra how to survive the difficult life of a brumby (a feral horse in Australia). She teaches him to watch the weather, to learn his way around the rugged terrain where they live, how to find food despite the winter snows, and most of all to be afraid of men. Very afraid. Bel Bel knows that Thowra's beauty will make him become hunted, and that he must use his cunning to remain free.

Elyne Mitchell's famous Silver Brumby books are set in the remote alpine high country of New South Wales. Elyne lived, worked and rode in the area, and her knowledge and passion for it is very obvious.


Spring was coming to all this mountain kingdom. Foals would be born, young kangaroos, possums and wombats would be snugly in their mothers' pouches. The hawks and great wedge-tail eagles would hatch their young; fat dingo pups would roll in the sunshine; and the wild horses would fight for their mares and gallop over the hills in all the glory of their strength.


I was surprised to have Bel Bel come across a dingo, as I don't normally think of them as alpine creatures, but they're there in low numbers. I also learnt that the beautiful crimson rosellas that I see every day are also called lowries, I've certainly never heard that name before. I wonder if it was a more common name for them in the 1950s when The Silver Brumby was written?

I do love that she's grounded it in such a specific, real area. Usually I don't like books with maps at the start, but I've enjoyed the map here, and have checked back to it quite often. I have visited the area, but not for a very long time. I've climbed Kosciosko (our highest mountain, and "climbed" I mean walk up the quite gentle track) as a teenager, but haven't really been back since then. I really must take the time to return some time soon. 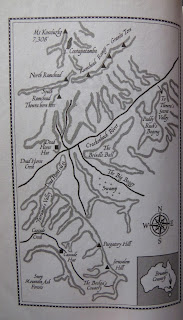 The Silver Brumby is well written and fast paced, with action in every shortish chapter. The author really conveys Thowra's fear of man, and his changing nature- his early antics as a foal, his love and knowledge of the wild, high places that Bel Bel has taught him, and his growing maturity as he grows up to become a colt and then a stallion with his own herd.


The bush was quiet as he went on his scouting expedition. The only sounds were the normal rustlings and movements of evening, as the wombats came out to sun themselves in the last pleasant rays, as the animals who feed by day went off to their homes, and those that fed by night started to stir. He knew no possums would come till that strange moment that belongs to no time at all, when it is neither dark nor light. Then their pointed faces, that are both curious and wistful, would peer down on him from the gum trees, and he would smell the strange possum smell, more pungent than eucalyptus, but very like it.


Elyne Mitchell went on to write 13 Silver Brumby books over 6 decades! The Silver Brumby was Highly Commended in the 1959 Children's Book Council of Australia Awards. Sadly it was beaten by two joint winners- Nan Chauncy's Devil's Hill and John Gunn's Sea Menace, both of which I fear are rather forgotten titles, I've not heard of them before, they appear to both be out of print and neither are available in my library. I've seen it speculated that the horses talking to each other, and to the other animals put the judges off. Whatever it was, with hindsight it was probably a mistake.

The Centenary Edition is perhaps a bit misleading. The centenary is celebrating the anniversary of the birth of the extraordinary Elyne Mitchell, not the publication of the book. Whatever the occasion I do think that it's wonderful that people are still reading this book.

I haven't read this either - talking animal stories were not my thing when I was little!
Some of Nan Chauncy's books are being republished by Text Publishing, but I've never heard of John Gunn either.

It's well worth a read Brona. I'm sure you still sell lots of them? I've seen the Nan Chauncy being rereleased, I have some of her books in my TBR, but haven't read any of her work yet. The great thing about reading is that we're never done, there's always something new and great to find.