Paris When it Sizzles 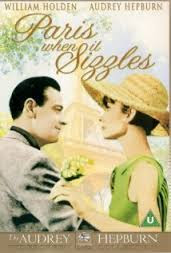 I had high hopes for Paris When it Sizzles. I enjoy Audrey Hepburn movies. She was so gorgeous, although I don't know that she was a particularly good actor. A few years ago I made the plan to watch all her movies, I started with Breakfast at Tiffany's, and last year I watched Funny Face (also largely set in Paris). I've watched My Fair Lady this year too, but don't think I got around to blogging about it.

After our recent trip to Paris I thrilled the boys with my pick for Friday Night Movie Night last week when I picked Paris When It Sizzles. I didn't know anything about it, but Audrey looked cute on the cover, and there was the Eiffel Tower too. Sadly neither Audrey, even clad head to toe in Givenchy, and wearing Givenchy perfume, or the Parisian setting can save this awful film. A preposterous story, Audrey's character Gabrielle Simpson turns up at alcholic scriptwriter Richard Benson's (William Holden) hotel room to help him knock out a movie script in two days.

They brainstorm a number of increasingly ridiculous ideas, which are acted out before our eyes. It's all too ridiculous, and only funny in a farcical way. It's silly. Really silly. Master Wicker actually enjoyed it well enough, and laughed in a different way to the nervous can this really be happening laughter of his parents.

Paris When It Sizzles is much more interesting to think about than to watch. A remake of a 1952 French film La Fete a Henriette/ Holiday for Henrietta. Wiki tells us that both Hepburn and Holden were forced by their studio to make the film as part of their contractual obligations. Complicating matters the main stars had had an affair while making Sabrina a full decade earlier. It wasn't just Richard Benson who was an alcoholic, William Holden was battling alcoholism during the filming. Miss Hepburn's perfume is credited (Givenchy natch).

Actually the bird was one of my favourite characters. You need to know a modicum of French history to appreciate why the bird is called Richelieu, and get the jokes about cardinals.

We saw that portrait in London! It dominates a room at the National Gallery. There was a similar portrait in the Louvre too.

Paris When It Sizzles sadly doesn't. I can't recommend it at all. Watch Funny Face instead for a dose of Paris avec Audrey.

I love Audrey Hepburn too, but I think I can safely skip this movie.

I have a box set with this, Breakfast at Tiffany's, Funny Face, and Sabrina, and yes. This is definitely the silliest of the lot!

I've not seen this one at all, and I can't think why not, as I love her films. Mind you, now maybe I'm less keen!

Well, too bad that it is silly. What a missed opportunity to create a great movie with that title. Thanks for playing along today. Here’s my Dreaming of France meme

I can't believe I missed a film by Audrey Hepburn -- and William H., too. Maybe it's a good thing, Givenchy notwithstanding!

I've been meaning to see this for years - Shame it's not up to snuff. And I thought Audrey could do no wrong.

Ha! It has such possibilities, too. Putting Funny Face in my queue -- I can't believe I haven't seen that, but it's sure not coming to memory so I might was well see it again.

Even if the movie did not sizzle, that suit is just lovely.

Yes, we tried it, too, when I was on a Paris Movie roll. Disappointing.