I love serendipity. A mere few weeks or months ago I would have walked past these lollies in the Reject Shop without a sideways glance or a single regret. Just recently I was stopped in my tracks by them. 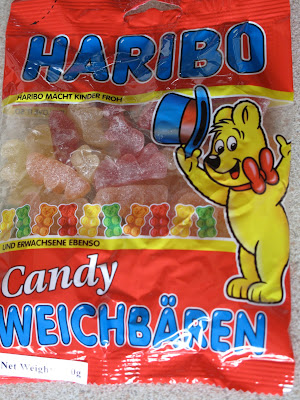 I remembered a recent-ish blog post from one of the many Parisian blogs that I torture myself with most days. I had only accidentally found the more humdrum gummi bears, that are the birthright of French children, and not the more exotic Dragibus and Tagada that I fear shall need to wait til my next trip to France (don't miss that link it's great, although it may not make you want to eat any of the Haribo products featured) .

So it was with great excitement that I found a packet of Haribo anything. I was then very surprised  to read the ingredients. Sure there was the usual Glucose syrup, Gelatine, Dextrose, Citric acid. No surprises there really. But then Fruit and plant concentrates (Safflower, Spirulina, Apple, Sweet potato, Carrot, Radish, Blackcurrant, Hibiscus and Lemon). Safflower- more than likely to be oil I suppose. But Radish! I've long been aware that the French are crazy for radishes. There are French Breakfast Radishes after all. But are they crazy enough to want them in their lollies? And the Germans are crazy enough to make radish lollies for them?

Of course I was fully intrigued by this time. Would they taste like radish? Or kumara? Or please God no spirulina? And then I read on down the label. There is further interesting banter:

This is a genuine branded product that has been parallel imported.
The composition and taste of the product may differ from the local equivalent product.
It does not have the official support of the local distributor.

Hmmm, almost a warning- Innocent Wide- Eyed Australians Beware! Those crazy Europeans types have put radishes and kumara and even goddamn spirulina in these lollies!!!! Eat at your own risk. Who knows what could happen? 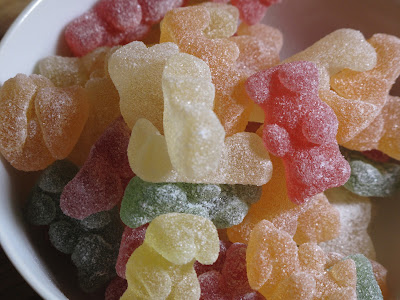 You might start wanting to eat radishes at breakfast instead of vegemite on toast. That would be rather unsettling, and rather Un-Australian. Ever willing to rise to a culinary challenge I ripped open the packet tonight.


All those vegetables but then only four colour variants? There goes my theories that there may be any with individual flavours. Each one does taste different to the others, they weren't like closing your eyes and trying to work out what colour of the giant python you were eating. But try as I might I can't discern any radish in any of them. It's tempting to think that the orange one might be carrot and kumara, and that the green one is spirulina and apple. But they all just taste like generically sweet lollies. The texture is quite a bit firmer than our traditional Australian brand lollies (is that what they were warning us about?), and not all that appealing for me. I don't know that these have immediately converted me or made me an addict. And we will just have to wait and see if I suddenly crave radish for breakfast in the morning.
Posted by Louise at 00:15

You are so funny, mon amie! I would say almost obsessed and I can relate to that totally! When I am in Paris in April I will seek out a bag of these to see about the carrots and radishes... wouldn't we love to know just how those veggies figure into the preparation of these "lollies"

Have a wonderful weekend!

'All natural colours and flavours!' They sound quite alarming. Give me a Giant Python any day....!

......they do look rather cute, though, being professionally lit :)

Genie, thanks so much. I'm very intrigued as to how they get the vegies in (and how much is actually in there- maybe I just don't understand enough German labelling to be able to read "homeopathic concentrations"?). I'm very jealous of your April in Paris, but would love to hear your thoughts on vegie lollies.

Fiona- they were quite alarming, but nowhere on the scale of that stinky tofu or other delights you've been sampling.

I thought so too Kath!