Shaun Tan's The Lost Thing: From Book To Film

Recently I had the pleasure of seeing the remarkable exhibition Shaun Tan's The Lost Thing: From Book to Film. This exhibition was commissioned by ACMI in Melbourne several years ago and is currently about half way through its national tour. I caught up with it at the Maitland Regional Art Gallery in April. 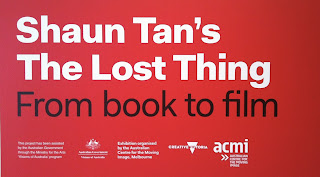 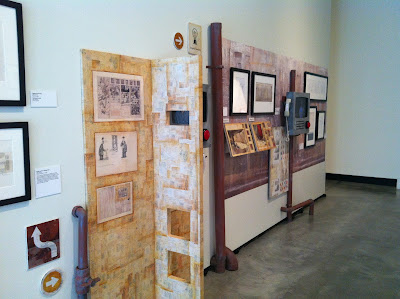 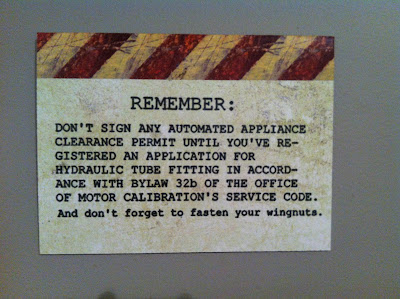 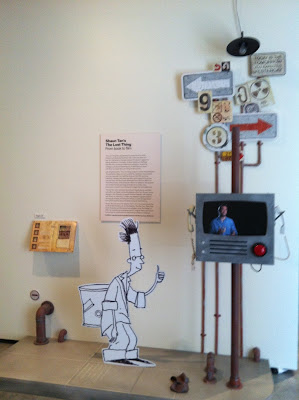 There were lots of cool video stations to help explain the transition from book to film. Fun to have old phone handsets in use again. 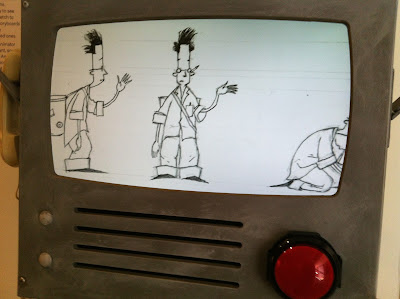 Clearly I have no idea how books, or films are made. The attention to detail throughout was astonishing. Shaun made a library of hand painted textures for the surface of every object, set and character in the film. Most were paint on paper, but he also used cloth and collage. The images were then scanned into computers and wrapped around 3D wireframe models! The boys skin texture was inspired by painted wooden puppets. 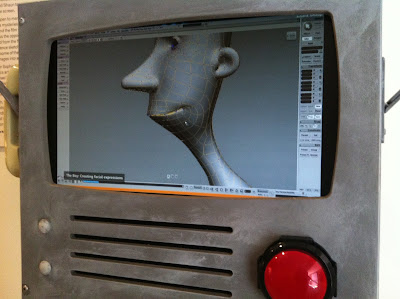 This is a first sketch for the Utopia of the film. The images for the book are portrait, whereas the film frame is landscape, and so lots of images had to be reworked to fit the different orientation. 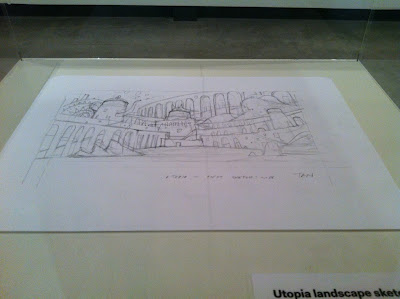 Learning about the sound effects was interesting too. Here they are making the rattling noise of the trams. 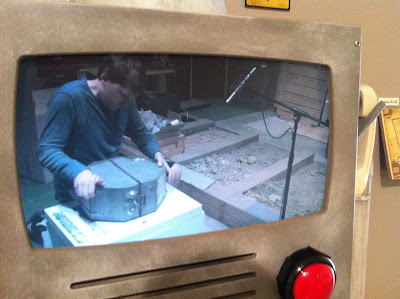 Even the way that the characters moved and walked was thought out in meticulous detail.


I learnt about some of Shaun's work on the book too. About the now iconic cover. 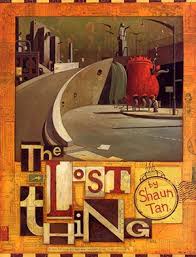 "There are a few artists who visually influenced the world of the book... painters who dealt with the urban environment as potentially quite a desolate place. Edward Hopper is very good at portraying that kind of universe; Jeffrey Smart, an Australian painter who captures disquiet in the urban landscape; John Brack of course with his paintings of wooden, stiff figures in a flat, almost oxygen-less world of buildings and rectilinear shapes. That group of artists was a touchstone for me in initially comps up with the idea of the world of The Lost Thing." Shaun Tan

Ah, it's so obvious now! I've read The Lost Thing a few times over the years, I think it's definitely time for a reread. My review on The Lost Thing is my post popular post by far, and has been for 5 years. Another reason that The Lost Thing a sentimental favourite for me I guess.

Each page of the book has a border which I now know is a collage made of Shaun's father's old engineering textbooks. He made collage tests to see if the paper would buckle or warp. I love learning this sort of stuff. I wish the books could include these sort of details. An extraordinary level of thought goes into Shaun's work, at all stages, and it really shows in the end product. Or perhaps it's all this hard work that makes it look, not easy, but seamless. 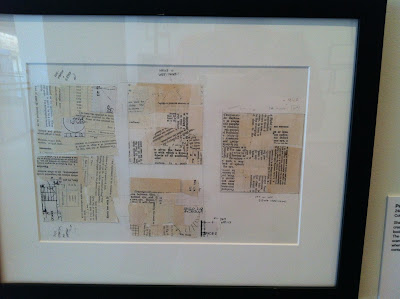 I've only just recently learnt that illustrators create a colour palette for the colours that they will use in a book. I saw this in a fabulous Freya Blackwood exhibition that I haven't told you about yet. I presume that they use these to keep track of the colours that they use and so the book has a cohesive theme. I guess they add colours along the way, and use it as a reference to colours they've already used. 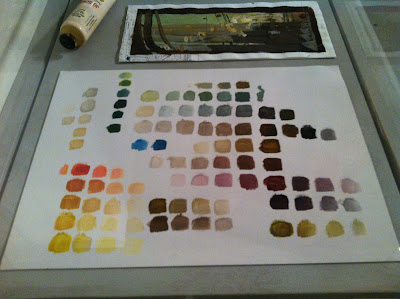 There was a fun room of sculptures. Some were things that looked like they belonged in The Lost Thing world, others made me think of Shaun's latest book, The Singing Bones, and the exhibition did refer to "another project" which I presume was The Singing Bones. 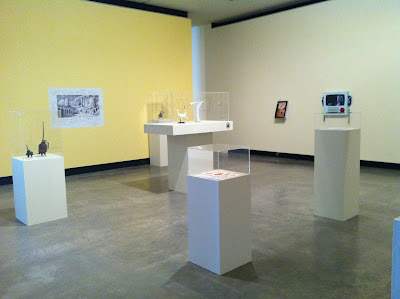 I just don't know how you think of doing this with an old lamp head.


Naturally there was a room at the end that was playing the movie on loop, but I ran out of time to be able to watch it. Thankfully we can all watch it on youtube.

I was a bit overstimulated by the end, there was so much to see, so much to take in. Glad I didn't miss Fetch Boy in the gallery grounds though.


Want more?
ACMI have made an exceptionally detailed teacher resource for the exhibition.
There are also many fascinating ACMI video interviews of Shaun Tan.
A great SMH article about the exhibition.
My 2011 review of The Lost Thing

How neat! Thanks for sharing!

I've never read any Sean Tan, but it must have been interesting to see how the book became an animated film, and I'm intrigued by the artworks - did they all involve recycled objects? My Snapshot is at https://thebooktrunkblog.wordpress.com/

Amazing exhibit! Thanks for sharing...and for visiting my blog.

I'm not familiar with this book or movie, but the exhibition looks fascinating.

The names are new to me, too, and the exhibits are very unique. Thanks for sharing.

I love this exhibit. Thank you so much for sharing it with us. Saved me a trip to Australia.