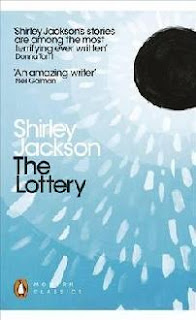 I'd never heard of either Shirley Jackson or The Lottery before Master Wicker read it for English last week and suggested I read it. Naturally I did, and it helps that it is a very short story and can be read in just a few minutes. It's available online here.

The Lottery starts off simply enough, in a bucolic small town.

The morning of June 27th was clear and sunny, with the fresh warmth of a full-summer day; the flowers were blossoming profusely and the grass was richly green.


I imagined it as a idyllic English village somewhat like that in The Vicar of Dibley. But Shirley Jackson was American and she set the story in her own small town, North Bennington, in Vermont. All of the villages 300 residents are gathering in the town square for the annual lottery that takes place each year on June 27.

The head of each household draws a piece of paper from a shabby and splintered black box in a village tradition older than memory. Some nearby villages have begun discussing giving up the lottery.


“Nothing but trouble in that,” Old Man Warner said stoutly. “Pack of young fools. “


But then it's a lottery you don't really want to win. The story is rather dated and sexist now.


It was interesting to read The Lottery and think about this rather famous American short story. It was understandably very controversial when it was published in The New Yorker in 1948. The many letters of complaint written in response to The Lottery are still making news nearly 60 years later. It has become one of the "best known and most frequently anthologised short stories in English." No wonder then that it has been adapted for the stage, tv, opera and even a ballet. And in what is perhaps the highest point of cultural recognition The Lottery was referenced in an episode of Series 3 of The Simpsons, Dog of Death.

Shirley Jackson is said to have written her most famous story in just two hours. Somehow taking her baby out for a walk one day to do some errands in the village inspired her to write this controversial story of conformity and violence that has had an enduring appeal.