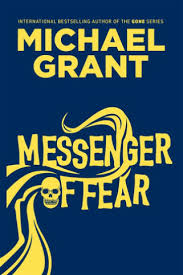 I'm really surprised by how much I enjoyed this book. To be honest I'm really surprised that I enjoyed this book at all. Horror and supernatural themes not being my favourite kind of reading. I've read my share of genre fiction in the past- sci fi and police procedurals/ forensic fiction in the main, but I don't normally read books with warnings on the back... 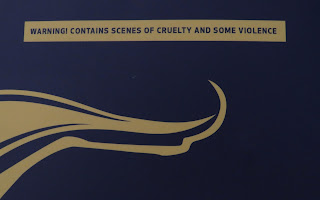 But I was soon to see Michael Grant as part of the Sydney Writers Festival and so was keen for a taste of his writing. Master Wicker has read and loved Grant's blockbuster Gone series, and had read this one, and been suggesting that I read it for some time, he thought it would suit me better. So now was the time. I didn't know anything about the story, or Grant's style at the outset, but was vaguely aware that it wasn't the usual fare for Ladies who Lunch and Read. Michael Grant had helped me accidentally learn about titles on the spines of books in English and French, and for that I was grateful.

The story begins with 16  year old Mara waking up in a strange location. She seems to be in a field. And there is a threatening mist surrounding her, it is the colour of "yellowed teeth" . Yes, there is emotive, creepy, dark language from the start. Things are clearly not right with the world. There is descriptive threat all around.

The mist swirled slowly, sensuously, and it touched me. I don't mean that it was merely near to me; I mean that it touched me. It felt my face like a blind person might. It crept up the sleeves of my sweater and down the neckline. It found its insinuating way under rough denim and seeped, almost like a liquid, along bare skin. Fingerless, it touched me. Eyeless, it gazed at me.


Mara doesn't remember anything about her life. She struggles to remember her name, her family, her home and her friends. She wonders if she is dead. I was a bit frustrated with this early on, and felt manipulated by the author, but came to realise that we the reader only know as much as Mara does, and we struggle to understand just as Mara does as she meets the Messenger of Fear.

I felt the tickling of panic. Somehow amidst all the evidence  of overturned laws of physics, all the unnatural flouting of the unseen but omnipresent laws, it was this, this creeping, sentient mist that most impressed upon my strained senses and raw emotions that I was in a place that was fundamentally at odds with reality.

There is an interesting back and forth between the real world and an odd supernatural plane. But not all the threats are supernatural, there is plenty of real world bullying and violence- both planned and random. Some scenes are quite disturbing, and yes there is cruelty and some violence. I was pleasantly surprised by the sudden appearance by Joan of Arc at one stage, although in Grant form things turned nasty rather quickly.

Messenger of Fear was a quick, enjoyable read on the whole, although a bit distasteful for me at times, and now I find myself being in the unanticipated position of actually being a bit tempted to read another one...

Labels: Books You've Never Heard Of But Just Have to Read, Joan of Arc