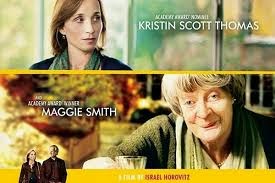 I hadn't heard of My Old Lady before I saw a print ad in the newspaper. I saw it merely as a new Maggie Smith movie. She's made several lovely films in the past few years including The Best Exotic Marigold Hotel and Quartet. So, I thought it might be nice to go along. Then Mr Wicker told me it was set in Paris. Naturally, I went along ASAP. 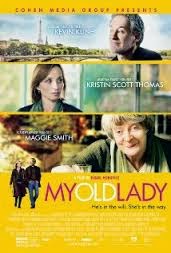 Kevin Kline plays Jim Gold, a somewhat hapless thrice married, thrice divorced New Yorker who is left an apartment in Paris in his father's will. And don't we all want that to happen? There is a catch however, the French have a particularly arcane form of sale, called a viager, where you can buy a property for a reduced price, and the former owner will continue to reside in the property for the rest of their life, while the new owner makes ongoing payments to the former owner. No, I hadn't heard of it before this either. Naturally, Jim Gold arrives wanting to sell the apartment immediately, and obviously the occupants aren't that keen. Of course, Maggie Smith, plays the elderly tennant, and the delightful Kristin Scott Thomas is her daughter, Chloe.

Rather unusually they gave quite a specific address as the location of the apartment in question, 13, Rue de Payenne 75003. Which was rather exciting as it was very near where we stayed in Paris last month, and I spent many pleasurable hours wandering about the general area. Paris has famously beautiful doors, and if you leave them open even briefly someone with a camera and a blog will stickybeak. The location has a fascinating history. I do wonder if the work being done was filming?

Thanks for posting about this, Louise. I remember Arti mentioning it as being at the Toronto Film Festival. And as far as I'm concerned, anything with Maggie, Kevin, Kristen and Paris will have to make for a good view, simple plot or not! Enough eye candy for me!

I'm glad you've a chance to see this, Louise, since it's not a widely released film. Yes, I saw it at TIFF, and was fortunate to see it again when I came back home. We were privileged at TIFF, for the director Israel Horowitz came on stage to intro. the film before it started. And... relaying some interesting anecdotes. A delightful film, thanks for writing about it. And, one thing I must point out, the trailer is discrete in not revealing an important twist. So, one needs to see the film to find out. And those are the scenes where all three veteran actors show their superb acting skills.

I can't remember if I saw this as a preview or if someone else posted about it. I do want to see it. I knew about the custom of buying apartments while people are still alive and waiting for them to die. Kind of like reverse mortgages here in the States. Thanks for playing along. Here’s my Dreaming of France meme

I saw the movie. Not the best ever but, as you said, it was fun looking at Paris.