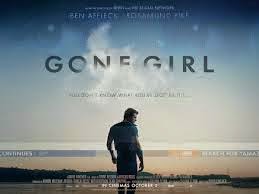 I didn't read the book, even though everyone else in the world seemed to. And so I didn't know all that much about the film, but I was still very keen to head along to see Gone Girl at the movies on the weekend. All I really knew was that it was about a wife that disappeared. I'm glad that I didn't know more than that really, and I will avoid any major spoilers here.

Amy (Rosamund Pike) and Nick Dunn (Ben Affleck) have been married for 5 years, until Amy goes missing on the morning of their 5th wedding anniversary. Naturally, the people closest to her come under suspicion and scrutiny, most of which falls on Nick. An exploration of love, marriage, personality and trial by media- Gone Girl is not one for the kiddies.

There are many clever plot twists, lots of interesting, if possibly objectionable, characters and for most of Gone Girl I was quite enjoying the ride. But then something happens near the end, that just spoilt it for me. I thought it was handled particularly badly in the movie- way OTT, and it never got me back after that. Indeed it got more silly and preposterous. Which is a shame. 80-90% of the movie was great.

Gone Girl has provoked a lot of online discussion about the portrayal of women, and whether indeed it is feminist or misognyist. It's an interesting discussion, but I'm not sure that I see it as either. The behaviours portrayed in the film are rather specific at times, and certainly not generisable. But don't take my word for it go see it yourself. You'll have an opinion, that's for sure.
Posted by Louise at 23:05

Haven't read it and doubt if I'll see it. Thanks for sharing your thoughts.

There is one major difference between the book and the movie...the main reason I think would have been to hurry things up a little in the movie.

You also like neither character in the book.
Once upon a time I may have been concerned about the stereotyping of Amy, but since then, I've actually met a couple of Amy's (although, thankfully not quite to her extreme)!
Nick could also be a male stereotype, except that men like him also really do exist.

They may be in extreme situations in this book & movie, but that's what makes good drama :-)

It has certainly got people talking.

Deb I can't imagine that you would like the movie at all.

Brona- it certainly has got people talking- so many people seem to have seen it. I've heard that Nick is more unpleasant in the book, and you feel little sympathy for either of them.

Interesting that last bit spoiled your enjoyment. I think Fincher's aim is to shock, and, a bit of a satirical farce, a hyperbole if you will. If you're interested, here's my take on the movie. And... appreciate your no-spoiler write-up. ;)