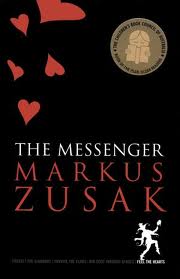 Like every reader in the English speaking world I too have read The Book Thief. It is certainly an amazing experience. So, I was very interested to check out an earlier work from Markus Zusak, The Messenger. You know you're in for an interesting read when the story starts with an armed robbery. And the first sentence is

The gunman, is useless.


The premise is fabulous. Ed Kennedy, is our somewhat nerdy, underconfident 19 year old hero and narrator.

My full name's Ed Kennedy. I'm nineteen. I'm an under-age cab driver. I'm typical of many of the young men you see in this suburban outpost of the city- not a whole lot of prospects or possibility. That aside, I read more books than I should, and I'm decidedly crap at sex and doing my taxes.


But he does have a wonderful, smelly old dog, called the Doorman. I think that's just about the most fabulous name for a dog that I've come across. Well perhaps apart from Taxi.

Not long after the bank robbery Ed starts receiving a series of intriguing playing cards, the first being the ace of diamonds, with 3 addresses and 3 times written on it. This card starts Ed's mysterious quest. What is going on in these houses? Something different in each one as it turns out. Ed needs to bring something to each situation. Particularly moving is his interaction with an old lady, Milla, who lives alone having been widowed many years ago.

I was really interested in, and impressed by the premise of the story, but never fully engaged in the actual reading. I enjoyed the book, but was never fully immersed in the story. And if truth be told, I think I'm still just a bit mystified by the ending.

This sounds good. I've had my eye on it ever since reading Book Thief. I guess now it's just a matter of getting my hands on a copy.

I had a similar experience. I wanted to read this after The Book Thief. I liked the story quite a bit and thought the writing was wonderful and the characters were fun. But it seemed like he got to the end and had kind of painted himself into a corner and couldn't get the ending right. Almost an "And then I woke up and realized it was all a dream" sort of ending.

I've never heard of this new one (or was it written before the success of The Book Thief? One of my favourites, incidentally).

Maybe it's something to keep an eye out for when I'm trolling through second hand book shops.