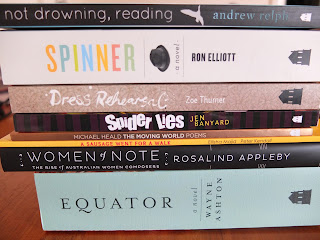 A few months ago I won the monthly subscribers prize from Good Reading Magazine. Naturally I was thrilled. I'd been subscribing since the magazine started. Early on I'd hoped to win, but as the years passed and I never did win and I forgot about it. Then 10 years of subscribing paid off, and I won the subscribers draw in November and got a wonderful box of books from Fremantle Press.

You can't imagine how surprised I was to receive a SECOND letter a mere 3 months later to say that I'd won the subscribers prize AGAIN! Nothing for 10 years then twice in 3 months! I have even more Good Reading stacking up ahead of me.

Women of Note by Rosalind Appleby
Equator by Wayne Ashton
Spider Lies by Jen Banyard
Spinner by Ron Elliott
The Moving World by Michael Heald
A Sausage Went for a Walk by Ellisha Majid and Peter Kendall
Not Drowning, Reading by Andrew Relph
Dress Rehearsal by Zoe Thurner

I'm not expecting a third, but would be more than happy to be proven wrong.


Saturday Snapshot, is a wonderful weekly meme from at home with books

Wow, you are lucky. You need to buy a lottery ticket next:)

Wow! That is amazing! Good for you...yes, and like Diane says, this might by your lucky lotto year, too!

Wow, lucky you! Enjoy your prize!!

A box of books is always a nice surprise. Even better when a second one shows up!

Cool! I've never heard of this magazine...may need to check it out!

Wow, that is so awesome! You'll be set for books for a few weeks.

What great luck! Enjoy your reading!

You are a favored one after 10 years. Congratulations.
A Sausage Went for a Walk and Not Drowning, Reading-I will read them first because of the titles.

Good for you. Must say I love the title "A sausage went for a walk".
Let's hope you have more such luck in the future :-)

How awesome! Did you pick a four-leaf clover recently?

Winning prizes never gets old does it? :) Very cool that you won twice!

Lucky you! Congrats on the second win.

Thanks for stopping by my snapshot.

Nice for you to be a winner twice, and hopefully, thrice! Have a good time reading those books!