A few weeks ago we travelled to Canberra for a lovely overnight stay. We went to see the wonderful Handwritten exhibition at the National Library. And we went to the National Gallery of Australia to see the blockbuster Renaissance exhibition. This is a big thing for Australians. Usually we have to travel in a plane for 24 hours to Europe to see paintings like this. A big undertaking. So it's especially pleasant to be able to hop in the car for a couple of hours to see Renaissance masterpieces. You can listen to an interesting interview with the Director of the National Gallery about the exhibition, and how it was made possible during by the renovations of the Accademia Carrara in Bergamo, Italy.

I hadn't thought much about it before we went, but had seen the many ads in the weekend newspapers every week. I of course got the audio tour, and settled in to enjoy a vicarious European experience for an hour or so. I wandered in, and then realised, a little to my dismay, that many of the paintings are the ones that I skim over in the Italian section of the Louvre! Madonna and child. Crucifixion. Madonna and child. Oh dear. I was amused during that Radio National interview to hear Michael Cathcart express similar difficulty with looking at multiple depictions of Madonna and child over and over again.

Still, it was an interesting exhibition. And fabulous to see. I can't help it that I'm a heathen. The audio tour was very good, and very helpful for me, not being overly au fait with Renaissance art. I was actually quite taken with a number of the pictures. Generally the non-Madonna and non-Crucifixion paintings it must be said. It is astonishing that images made with egg yolk and pigment still look so magnificent after 500-600 years. The golds in particular are often so radiant.

At one stage I was drawn across the room to look at this particular painting.

It seemed most unusual. Why was this man flaunting his thigh? Why did it have a lump so prominently displayed? Yes an interesting lump will always attract my attention across a crowded room. Turns out that the owner of the lump is Saint Roch, in a painting by Marco d'Oggiono, a follower of Leonardo da Vinci. As I was reading the all too brief material next to the painting I had a lightbulb moment. 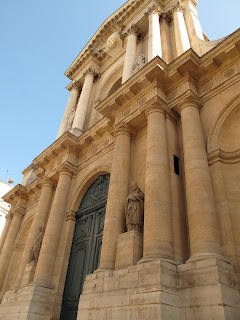 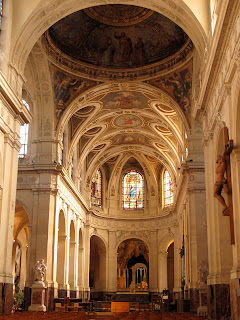 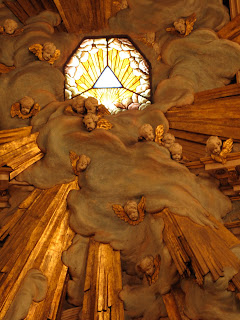 And I had never thought about who St Roch might have been.

From the fourteenth century the cult of Saint Roch (1295–1327) was widespread. He is said to have distributed his inheritance among the poor to become a mendicant pilgrim. He left his home in Montpellier, France, to walk into plague-stricken Italy where he cured the sick with the sign of the Cross. He succumbed to the pestilence himself, but recovered and returned to France where he died in prison, having been mistaken for a spy in his pilgrim’s clothes.

No wonder he looks downcast and miserable. Saint Roch, Saint Rocco to the Italians, is still very popular it seems. His feast day is Aug 16. He is the patron saint of dogs (because he survived on bread brought to him by a dog, and is often pictured with a dog), plague and diseased cattle, and apparently surgeons and tile makers amongst other things.

You can read much more about this particular painting, and indeed see most if not all the paintings in the Renaissance exhibtion, really take a virtual tour, at the NGA site. It's impossible to link to specific pages, that link takes you to the introduction. Saint Roch is featured in the Late Renaissance tab.

Good old Saint Roch - I always hoped that there'd be a patron saint of goggies somewhere....

This time next week I will be looking into the side windows from an apartment in Paris. Thank you for these details. I have photographed this lovely church many times and will step through its doors once again, camera in hand and expectations high.

Everyone needs a patron saint I think Kath.

Genie- I'm so jealous. What a fantastic vantage point. I look forward to learning more about Eglise St Roch through your lens. I love it when fascinating gems of knowledge turn up somewhere unexpected like this.