Wondrous Words Wednesday is a fabulous weekly meme hosted by Bermuda Onion, where we share new (to us) words that we’ve encountered in our weekly reading.
New words can come from anywhere. Today I've found my words in books, on the tele, and online.

Today's first word came from Maurice Gee's Under the Mountain. It did have a number of words that weren't exactly new, but that I did look up- like kapok and manuka, just to see what the tree looks like really, I'm familiar with, but not overly fond of the honey.

They saw other boats in it- yachts and motor boats cruising back from the gulf, a scow hauled by a launch, a coastal freighter waiting for its pilot- and far behind, but closer than they had expected, the small white foam patch made by the Wilberforces.


This word came as I was reading the final credits of an episode of Outnumbered. An amazing BBC comedy series if you haven't seen it.

Seems to be a contracture of charity mugger. I like this longer definition from Urban Dictionary too.

Paid "charity" street worker (read: student) who has been trained to believe that they are carrying out a worthy task, improving peoples' lives by conning Joe Public out of their money for this week's Good Cause. Usually an agency worker where the agency takes a hefty cut of the hourly rate that the charity in question has paid for, whilst at the same time increasing profits by selling on details of those foolish enough to actually stop and sign up to said Good Cause.

I had encountered chuggers before, recognised them for what they are, but never knew what that they had a name. And then there it was the very next week on Gordon Street Tonight!

One of my favourite Outnumbered scenes:

And this one from reading a Huffington Post article. Probably a waste of time article, but I still learnt a new word.
3. Doo rag
A piece of cloth used to cover the head. Wiki.
Ah, I knew what these are, but not what they are called, or even that they had a name beyond bandana. 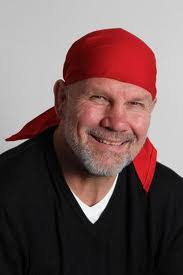 I recently read From the Mixed-Up Files of Mrs. Basil E. Frankweiler. Which, whilst it was a great book, it wasn't a great source of new words. But I did find one. Which much like dandled is now popping up everywhere I look.
4. Boodle
More than twenty four dollars. That would be quite a nice boodle to put in their knapsacks if they were using knapsacks instead of instrument cases.
i) Money, especially counterfeit money
ii) Money accepted as a bribe
iii) Stolen goods; swag
iv) A crowd of people, caboodle.
v) All of one's possessions; a disorderly mass; a crowd; a lot; stock in trade; capital. The Free Dictionary
Then they give an example
Example: whole kit and boodle, 1625.
Which is interesting as in Australia we would say the whole kit and caboodle. A term I haven't really thought about until today.
Posted by Louise at 08:35

Thanks for dropping by!!

I knew doo rag! We don't have chuggers around here, thank heavens. Thanks for playing along.

I love the UD definition of chugger, and I especially love that English can come up with such words!

Beware of the chuggers, great words.

Your words are fun. I've heard of and seen a doo rag. I like boodle. Makes me think of poodle.

Funny words and videos. Thanks to you !

I love that scene from Outnumbered. I don't think we get that show here in California but I'm going to check. I also love the way you present your new words. It's always fun to come here and read them.

The only one of your words I am not familiar with, is 'doo rag', whch doesn't sound all that nice to me! Not something I would want to use in conversation!

'kit and caboodle' is (or was), a common expression here in the UK as well and is certainly something that was used all the time, when I was growing up.

'Outnumbered' is a fantastic show, isn't it? We never miss an episode, although I have often wondered just how the humour would translate in another country. Interestingly, in the early series, the shows were never rigidly scripted. There were rough guidelines set, but basically the children could say pretty much whatever they wanted and the adults had to adapt their dialogue accordingly! There is an old saying about never working with animals and children. the scenario that is painted for this show, must have been a nightmare to work with!!

If you check out my WWW post for last week, you will see that I came up with another of the interpretations for the word 'chug', although all in all, it just really isn't a nice word at all.

Enjoy the rest of your week, good talking with you.

I loved "doo rag"!! I had never heard of it, but I'll try and use it this week! :-D
One of the best words I've ever come across is "throttlebottom": A purposeless incompetent in public office.
(Unfortunately, given the increasing bureaucratisation of our lives, I do not have difficulty finding opportunities to use that word :-X )