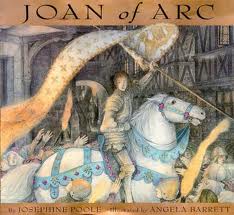 I became interested in Joan of Arc last year. Of course she's very famous and most everyone is aware of her to some extent. But I came across a rather fascinating section about her in Jim Leavesley's Mere Mortals. This is the second junior nonfiction book that I've read about her now. Both were very interesting.
Her basic story is fascinating of course. As a teenage girl Joan began hearing voices from Heaven. 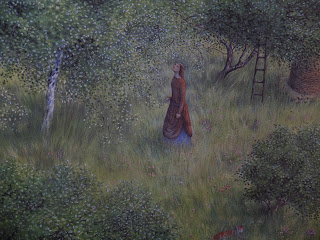 These voices told her that God had chosen her to save Orleans- a French city under siege by the English during the latter years of the Hundred Year War, and then to take the Dauphin to be crowned as King of France in Rheims (also held by the English). She sets off to see the Dauphin. 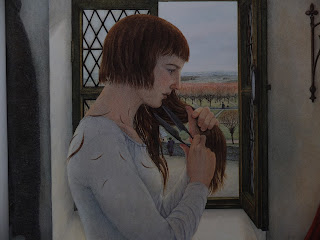 The Dauphin is aware that Joan is coming, and decides to test her, by dressing as one of his courtiers. Joan immediately walks straight up to the Dauphin. Joan arrives in Orleans by the back gate (surely it can't have been that easy?? Is it really a siege if you can just ride in the back gate?). But Joan did save Orleans. She was later captured by the English, stood trial, and famously burned at the stake in Rouen.
So, what did I learn from this book specifically? 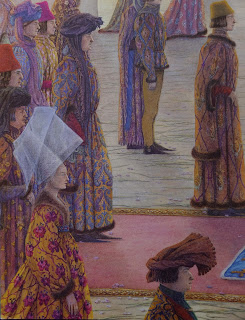 Joan was injured by an arrow during the battle for Orleans. The surgeon is said to have dressed her wound with olive oil and lard.
That Joan was captured at Compiegne after the French Captain of Compiegne raised the drawbridge behind her forces, locking her out of the town. She was outnumbered, overpowered and taken prisoner.
I knew that after her capture and imprisonment Joan had jumped out of a tower window. Here, we are told that Joan was so injured after her jump that she wasn't able to eat or drink for two days.
The judge at her trial in Rouen, which was the English capital in France at the time, Cauchon, the "wicked Bishop of Beauvais" was paid by the English to rig the trial, and find her guilty of heresy.
Her life becomes more fascinating with each book. I was initially put off a bit by this book, just because the cover illustration seemed a bit grim and drab. Although I guess her life was grim and drab really. The other pictures within the book are brighter, and more appealing to me. I'm not sure that I would have put that particular one on the cover.
An Illustrated Year is hosted by An Abundance of Books. 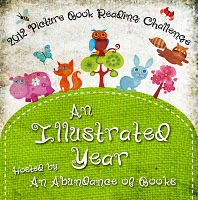 I recently read about her in Stephen Clarke's amusing-and-informative '1000 years of annoying the French' - he states that she was betrayed by the French people.... ?

I love it when I learn something from a book! Can you imagine having a wound dressed with oil and lard?

Oh Kath. I hadn't heard of 1000 years of annoying the French. And now I desperately Need it. Just googled it. I am in peril.... 688 pages has me worried though. I think she was betrayed by the French. I need to do more reading of course. But even this picture book suggests that her capture was because the French shut her out of the city in battle.

I do too Kathy. Things like that make me wonder how people will shudder in 500 years time at what we did!

I too find Joan of Arc's life fascinating. I will check out this book. Have you read Demi's Joan of Arc -- exquisite illustrations inspired by the stained glass, architecture, painting, and sculpture of the fifteenth century.

I saw a review of Demi's Joan of Arc, and bought it immediately! I haven't read it yet. Not even peeked. I wanted to read this one first, because the blue of the cover of the Demi book is so intoxicatingly gorgeous, I didn't want this one to pale by comparison. I plan to read it soon.

I have had this book on my shelf for a LONG while. I really need to read it! Beautiful illustrations. Thanks for sharing it.

This looks fantastic. I was in love with Jeanne when I was in the 8th grade and still have a soft spot for her.

The pre-Raphaelite-esque illustrations are amazing.

Hi Louise, I've been looking for titles connected to Joan of Arc for our Girl Power theme. And this seems like the perfect one indeed. :) Hopefully, I find this one in our community libraries.

One of the things that also fascinates me about the story is that some time after Joan d'Arc was said to have died, a woman appeared claiming to be her. If I am remembering correctly, Joan's brother vouched for this woman and she was given a house and money and lived quietly until her death. Very interesting!