The Adventures of Tintin 3D 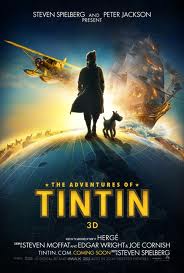 I was so pleasantly surprised by this movie. The reviews I'd seen had been lukewarm at best really, and the gushings of Richard Wilkins have never swayed me, so I wasn't sure what to expect. I hadn't been a great Tintin fan as a child, and so wasn't familiar with the stories. I was hoping to catch up with the three stories that were the basis for the movie- The Crab with the Golden Claws (1941), The Secret of the Unicron (1943) and Red Rackham's Treasure (1944). But the Chrismtas period got away from me, and there was only one opportunity to go see the movie as a family outing so I went before reading the books.

And it was fun. Much more funny than I expected. Much of the humour comes from Andy Serkis's wonderful Captain Haddock. A hard drinking Scottish sea captain is always going to provide some excellent opportunities for humour. Certainly much is made of his drinking, and the movie actually has quite a strong anti-drunkenness message.

Tintin is of course a famous boy reporter, who rather unwittingly becomes involved in a mystery when he  buys a model of a ship at the town flea market. The story is action packed and I think the 3D effects are the least annoying of any 3D movie that I've seen so far. They didn't seem tacked on for the sake of it, even though I guess at times they were.

It is a movie that appeals to all ages too, my 11 year old son loved it, and my mother enjoyed it as her first experience of a 3D movie. Actually, my son and I both want to see it again.

After seeing the movie I did get a chance to read the books. All were so much better and more refined and developed than Tintin in the Land of the Soviets that I read recently.

The Crab with the Golden Claws has opium trafficking as a central plot which was skipped in the movie version. Opium trafficking not being too kid-movie friendly I guess. I do love Captain Haddock's strings of inventive profanities. Swine! Jellyfish! Tramps! Trogolodytes! Toffee-noses! 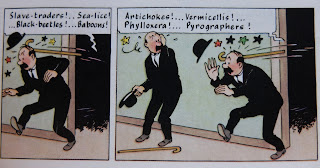 Some elements of the three stories are reproduced exactly in the movie, other parts changed, others omitted completely. Red Rackham's Treasure introduces the eccentric, stone deaf inventor Professor Calculus who is left out of the movie. Still it's fun to meet Tintin properly after all these years, and I hope to read some more Tintin titles.
Posted by Louise at 23:02

We opted to see this one in 2D and we all thought it was great too. I'm glad to see your son liked it - I thought it would appeal to the younger generation.

Tin-Tin is huge in France and here in Geneva, so I think we'll end up seeing it just out of new loyalties. I've never read one of the books though - even as a child it looked very out of date to me, but the continuing love of the Tin Tin series must have *something* going for it...???

Tintin was new to me with the movie trailers. But this is something my husband might get a kick out of. Especially since Kathy says it's good in 2D, too. He's skeptical of the whole 3D thing and Hugo didn't convert him.

On Saturday, I'm going to see Beauty and the Beast 3D with a friend who has preview tickets. I want to see that library in 3D!

I'm not at all familiar with Tintin, so the movie didn't have much appeal for me before, but now I'm intrigued. Maybe we'll venture out to the movies after all.

Kathy, I'm glad to hear that you liked the 2D version too. Maybe I'll see it again in 2D? I'm sure I will when it comes out on DVD.

How fantastic to be able to see it in Europe Kath. I really did like Captain Haddock. He's got a lot going for him, certainly- excellent inventive swearing.

Joy, I can well understand your husbands 3D scepticism, I'm not a great fan myself. But it is a fun movie, I hope you enjoy it if you go.

Susan, Tintin never took off in America for whatever reason. This is certainly his breakthrough moment. It is a fun kids movie.