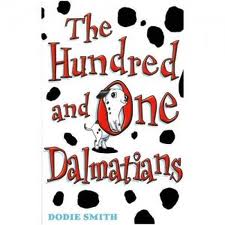 I was anxious about this book. I've seen the Disney version and read lots of abridged versions when my son was younger, and I didn't like them all that much. In fact I'd really come to quite dislike them. The Independent suggested that Dodie Smith had been eclipsed by Disney, which is sadly true I think. But I should have known better than to doubt the original.
The basic plot of the story is familiar to most of us from the Disney movie I suspect. Mr and Mrs Dearly are a lovely couple, living in London, who have two Dalmations, Pongo and Missis Pongo, who have a litter of 15 puppies. The Dearly's are somehow friends with the terrible Cruella de Vil, who wants to make a Dalmation coat, and so she steals the Dearly pups, and many other Dalmations to make her coats. Pongo and Mrs Pongo set out on a journey to get their pups back.
That is the bare bones of the book too. Naturally there is so much more nuance than the movie. So much more humour. It is written with an omniscient third person point of view, so we get the thoughts of the major characters- particularly the dogs, who while they only speak dog, they are able to understand English. Indeed the dogs here think of the Dearlys as their pets, and the dogs take their pets for walks at times. Cruella hosts a dinner party to get to the dogs and all her food tastes of nothing but pepper.
I learnt quite a bit about Dalmations from this book, not a breed I'd thought a lot about, although of course they are possibly one of the most distinctive dog breeds. Dalmations are thought to originate from the Dalmatins Coast in Croatia. They used to be used to run behind carriages for reasons which aren't totally clear to me. Dodie Smith tells us that Pongo was a name commonly used by these Dalmations who ran behind carriages. Later on Dalmations became "firehouse dogs" in America. Wiki tells us lots more interesting things about Dalmations- such as they are prone to deafness and gout.
There is a delightful English gentleness suffused throughout the book.

Now (Christmas) carols are always beautiful but if you are sad they can make you feel sadder. (There are some people who always find beauty makes them feel sadder, which is a very mysterious thing.)

Perdita here is not Pongo's wife, as Disney would have us believe, but rather a lost dog (perditus being Latin for lost, and also a Shakespearian reference) who becomes a wet nurse to the bumper crop of puppies. Another Latin reference is cave canem "beware of the dog", which is apt, but I do wonder if young children actually got Latin references in 1956, or if their parents were much more likely than now to know what it meant. I do particularly like the notion of the twilight barking, it seems a perfect bookend from the dawn chorus, that the dogs use to communicate, perhaps all those dogs barking in the distance are really trying to help find lost puppies?
Posted by Louise at 23:36

I must say I thought the movie was a hoot ... but I can imagine the original would have more bite. Have you read her I capture the castle?

I haven't read it yet. Naturally I Capture the Castle is on the TBR, it's in the 1001 list. I actually have the book (and the movie) literally sitting on the shelf.

I may have to dust this one off today and see if I can get someone to check it out!

I absolutely loved this book when I was a child. I went on camp in Grade 6 and our campleader read it to us at night. As soon as I got home, I talked Mum into letting me buy it (books were not a high priority in our house) and it was a treasured little paperback for years. When I got to high school, I read "I Capture The Castle". I kept borrowing it over and over again because I loved it so much. Oddly, though, I didn't buy it. So when I saw it in a second hand shop recently, I snapped it up. I might even read it again one of these days.

Janine, I remembered the story from my childhood, but don't think that I ever read the book then. Nice to know it was a favourite for you. I haven't read I Capture the Castle, but it sits waiting in the hulking TBR, great to know that you loved it. I'll get to reading it one day.