Whiling Away the Hours 2019 Edition

I recently had the privilege and pleasure of travelling to Europe. So I spent a lot of time whiling away the hours in economy. I was desperate to watch Fleabag, but Series 1 was not available anywhere sadly.

On the way to Helsinki I only managed one movie. I finally got to watch The Wife. I've been keen to watch this for a while, but never managed it, so enjoyed the opportunity to finally see it. I haven't read the book, but knew enough about the book and movie to guess the plot twist very early on.


I'm not sure if it was the cramped economy watching, or the middle of the night feelings, but while Glenn Close was fantastic, a couple of the male actors really got on my nerves. Unusually after watching the film, I'd still be interested in reading the book.

I really can't explain what else I did on the way to Helsinki, but I didn't watch anything else.

I watched two movies on the way home. Both on my rather sleepless Hong Kong to Sydney flight. First up I watched Swimming with Men.

Which was perfect economy seat fodder. Light, fluffy, no surprises particularly (although perhaps how long it took me to recognise Jane Horrocks was a surprise), and actually laugh out loud funny at times. Always good for your neighbouring passengers.

Then I watched The First Monday in May. I do so love a fashion documentary, and this one was particularly fascinating. I watched it twice back to back. I did manage my only sleep between Budapest and Helsinki during the first run through, so I rewatched it and managed to stay awake the second time. Indeed I was riveted to the small screen.

The First Monday in May is a 2016 documentary looking at the year of preparation and planning for the 2015 Met Gala, the annual fundraiser for Metropolitan Museum of Art's Anna Wintour Costume Center. Each year the Gala is themed for the upcoming spring fashion exhibition at the Met. In 2015 that exhibition and theme was China: Through the Looking Glass.

It was a fascinating peek into the amount of hard work that goes into creating a blockbuster fashion exhibition and event. Months of meetings. Trips to Paris and Beijing. I loved seeing Andrew Bolton (curator of the exhibition) wetting himself visiting the YSL Archive in Paris.

Naturally there were tortured discussions and a lot of hand wringing about whether fashion is art- at this level it certainly is, and whether it belongs in a museum- yes, it certainly does. Even though the designers deny that rather strenuously. Karl Lagerfeld was still with us and he called what he did applied art, while Jean Paul Gautier said that he doesn't design clothes expecting them to be in museums. I well remember the sensational Jean Paul Gautier exhibition I saw in Melbourne (way back in 2014! Can that really be 5 years ago?).

The final exhibition looked amazing. Chinese art and film was displayed along with the fashion. The presentations of the rooms were incredible, every one jaw dropping, different, so imaginative. Glass poles lit from below creating a bamboo forest of light sabres! Definitely next level.

I learnt about some topics that I'm keen to followup on. There was a focus on the impact of Chinese film. JPG was fascinated by a film called In the Mood for Love, he watched it over and over again and a year later produced his chinese inspired Autumn/Winter 2001 Couture Collection. The trailer for In the Mood for Love makes it look creepy, we will see. It seems to be available on Kanopy. I haven't used that platform yet, this seems to be a good excuse. Most of the designers featured were big names and I was quite familiar with them. I hadn't heard of Chinese designer Guo Pei, but am intrigued, and will be checking her out.

A similar amount of work went into the production of the Met Gala. Anna Wintour is extremley impressive to see in action. The amount of thought that goes into the seating plan is phenomenal. So many egos to be massaged. "We should bury this table." And celebrities are "great carpet material". Whilst the little people, we the general public "will just come back next week" according to Wintour when she needs to close a gallery a day early for preparation for the Gala. Some of those people have travelled from around the world, and will be there for one day only, they can't come back next week.

Anna Wintour was a walking ad for Starbucks. Someone needs to buy that woman a keep cup. 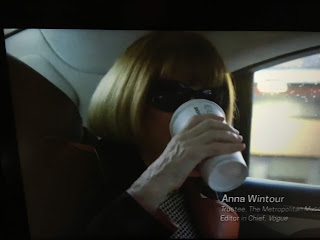 The First Monday in May is highly recommended.

Labels: at the movies, Fashion, Whiling away the hours

I plan to download lots of audiobooks from the library for my next overseas trip. I wonder how long it takes you to get to Europe. Half a day, maybe? Or more? That’s a long time to be in an airplane seat.

Thanks for your thumb up for The Wife. Ever since I saw Glenn Close in the stalker movie, I’ve been afraid to see her in film.

It take us pretty much 24 hours to get to Europe! From Sydney we fly for 5 hours before we leave Australia. It's a very long time in an economy seat.