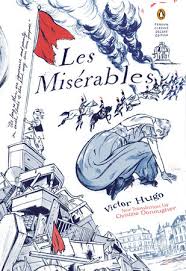 Finally after 57 pages of buildup, 57 pages of beautiful, wordy preamble we meet Jean ValJean! The story proper, well at least as told in the musical versions can now start.

We are treated to quite a description of Jean Valjean.

It would be hard to come across a more wretched-looking passer-by. He was a man of average height, stocky and robust, in the prime of his life. He might have been forty-six or forty-eight years old. A cap with its leather peak pulled down partly concealed his weather-beaten face streaming with sweat. His shirt of coarse yellow cloth, fastened at the neck with a small silver anchor, revealed a glimpse of his hairy chest. He wore a rolled-up neckerchief, threadbare blue drill trousers with one knee faded to white and a hole in the other, a ragged old grey overall patched on one elbow with a bit of green cloth sewn on with twine, a soldier's knapsack on his back that was stuffed full, firmly buckled and brand-new; a huge knotted stick in his hand, hobnailed shoes on his stockingless feet, a shaven head and a long beard.

We are warned several times that he is an untrustworthy, dishevelled looking man.

The sweat, the heat, the journey on foot, the dust, added an indefinable disreputability to this shabby outfit.

Jean Valjean has been released from his sentence, given a yellow passport and has to report in to town halls on his route.


Release is not freedom. You are let out of prison, but you continue to serve your sentence.

On the day after his release Jean ValJean finds a days work unloading bales outside an orange flower distillery in Grasse. I doubt that his day's work was anything like this video, and it's interesting to contrast a world needing orange blossom water for perfume manufacture as the same world that has just incarcerated and tortured Jean Valjean for his poverty for 19 years.

Even though Jean has money to pay for food and lodgings he is turned away from every door in Digne, after news spreads like wildfire that he is an ex-convict, until it is suggested that he knock on the Bishop's door.

Here of course he is welcomed warmly, he offered a meal and shelter for the night. And finally after 25 chapters, 25 days of reading, we have a real plot point! Some action.

He raised his iron candlestick as though to force the lock. The key was in it. He opened the cupboard. The first thing that met his eyes was the basket of silverware. He took it, and throwing caution to the wind strode across the room not worrying about the noise, reached the door, re-entered the chapel, opened the window, seized his staff, climbed over the ground-floor window-sill, put the silver into his knapsack, threw away the basket, crossed the garden, leapt over the wall like a tiger, and fled.

It was so, so tempting to read the last two chapters at this stage, to gobble them up and be ready for Book 3. I was forced to distract myself with housework (ugh) and trying (but failing) to catch up in my French reading , and writing this post (much more delightful diversions). I was unable to resist the temptation though on the second last day, and read two chapters so that I could finish Book 2.

In the very final chapter we see Jean Val Jean hit rock bottom. Not only has he stolen from the kindly bishop (who has then not turned him in), he has come so low as to steal from a child, and for no apparent reason.


His past life, his first missed, his long expiation, his outward brutalisation, his award hardening, his release celebrated with so many plans of vengeance, what had happened to him at the bishop's house, the latest thing he had done- stealing forty sous from a child, a crime all the more craven and all the more monstrous coming after the bishop's pardon- all this came back to him, he saw it clearly, and with a clarity such as he had never seen before. He beheld his life and it looked horrible, he beheld his soul and it looked dreadful.


Victor Hugo gave us some spiriting, suspenseful passages in these latter chapters, and it bodes well for all the action to come.

Slow Reading en français: I'm sad to report very little progress, well actually none, mainly because I've been gadding about the place on holidays. I'm planning on better progress next chapter.
Posted by Louise at 20:21

Great wrap-up of these last chapters of the read-along.
I'm keeping of schedule and trying to find some tidbits of info I can share about V Hugo and the writing of the Les Mis. Hugo does use autobio items but mixes them with ficton. It's a puzzle to figure out!

Thankfully it’s just one short chapter a day otherwise I would have fallen behind weeks ago!

Great wrap up Louise. The candlestick scene is very memorable - made more so by our slow read I believe - as I really had time to absorb the bishop’s goodness.

I finished the first chapter of Book 3 & I’m very excited to meet Fantine for the time - hers is one of the names I know.