Five Give Up The Booze 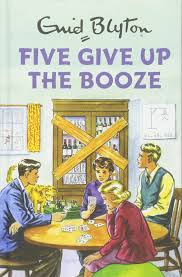 I was openly coveting Enid Blyton for Grown-Ups since the first time I saw them about a year ago, even though I was worried that the joke might wear a little thin over a whole (short) book. A lovely friend of mine bought me two of the books when I was in Sydney a few months ago. This week I finally had the time to get to one, so I picked up Five Give Up The Booze. And what a hoot it is.

The four cousins of Blyton's Famous Five- Julian, Dick, Anne and George are now all grown up. They're in their late 20's, they've finished uni, they're living and working in North London. They all share a flat and have developed a bit of a big drinking lifestyle. Dick pops into the pub for pint without thinking about it. Julian slugs away at port over Christmas.

Five Give Up The Booze starts as many similar resolutions do with a very big night out at a New Years Eve party that gets just a little out of hand. They all preload with champagne cocktails before heading out to what they expect will be a bit of a dull party, one that will end up as an early night.


'That's settled, then,' said Julian. 'Let's see if we stick to them. And guys, how about we aim to get out of here good and early? Stick around for the glass of champers at midnight, two verses of "Auld Lang Syne" and then back into a cab? I'm fond of Jessica, but her parties are tame, even by our standards.'


Oh haven't we all been there and done that? Anyway, the night turns much bigger than they expect, and the next morning is not pretty, it's not comfortable. So the cousins decide to do a dry January, giving up the drinking and the alcoholic blackouts for the month.

Five Give Up The Booze is a perfect cautionary tale- both of the hard living lifestyle of so many young people, and how tedious it can be going a whole month without the grog.

He loved booze. He missed booze. Just a few more hours of sobriety, to prove I don't need it, he thought.

Timmy the dog is still with us, even though he must be about 75 years old, and much humour comes from his view of things, and his elderly digestive system.

I'm sure that my childhood devotion to Enid Blyton's Famous Five as a child helps colour my reaction to this book, but I think you could approach it with less knowledge. I read all of the original books in my own childhood, and remembered them very fondly. Then about 10 years ago I read all 21 books aloud for night time reading for Master Wicker. Now that's maternal devotion. Even I was really struggling by #13.

Like most things there's an interesting back story to the creation of the Enid Blyton for Grown-Ups series. And the famous "lashings of ginger beer" actually comes from an early 80s TV series Five Go Mad in Dorset which I'd somehow never heard of. But Jennifer Saunders, Dawn French and Adrian Edmondson (who all look terrifyingly young) reworking the Famous Five! Wow, I'll be chasing that down very soon.

I can't wait to get to Five Go Gluten Free.