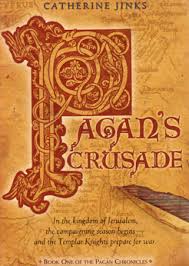 I’ve been wanting to read Catherine Jinks for quite some time. I saw her talk at my local library quite a few years ago now- it must be more than 5- and have been keen to read her work ever since. A friend is a fan and especially enthusiastic. Although I must admit that this title in particular wasn't really in my sights, and the cover doesn’t really do it for me.

Twelfth century Jerusalem is really an odd choice of setting for a kids book isn’t it? It did put me off a bit, but then I really wouldn’t want to read adult books covering this era either. It’s also not a setting or time that I know an awful lot about, and I presume most kids wouldn’t either. Although my copy published in 2000 shows it was reprinted 7 times since 1993, i.e. roughly once a year, so it must have been quite popular.
So, our story starts with 16 year old Pagan Kidrouk joining up to become a squire with to Lord Roland Roucy de Bram, a Templar Knight. It’s clear that Pagan needs a job quickly and is in some sort of difficulty. Pagan describes himself as “godless mercenary garbage”. Pagan was raised in a monastery and has the rare skill of being literate and educated in a time when most people aren't and even Lord Roland himself cannot read.


'My lord, with all respect, you shouldn't take my learning too seriously. It might look impressive to be able to read, but that's because you can't read yourself. When you learn to read, all you can do is read.'

The story is told in three parts, each quite separate really, occurring over several months in 1187, with the mounting threat of invasion by Saladin- a real historical person and event, but who I'd never heard of before, and it felt a little Lord of the Rings to me (not that I've read that, only watched the movies).


It's a peculiar feeling- like a cold wind on your heart. The fact that it's actually happened. It's actually happened. You live with it all your life, like a cloud on the horizon, and suddenly the storm is overhead. They've come at last, after all this time. The Infidels. Practically on the doorstep. And it's not a surprise. That's what's so awful. Everyone born here- we all knew they would come. Everyone born here is born waiting.


Pagan's story is told in his first person rather modern voice, which I think I found a bit discordant to start with but by the middle of the book I was almost swept up in the story, and did find it quite humorous. I do really like Catherine Jinks’ descriptions. And this one of an alley is astonishing.


It’s like entering someone’s intestines. Narrow, slimy, smelling of dung. A cloud of flies settling like a cloak over your head and shoulders. Bones. Rats. Sludge from the nearby tannery.

I ended up enjoying Pagan's Crusade much more than I expected to, settling in enough to find the humour, especially in the middle pages, and found it a bit evocative of Monty Python's Holy Grail in places. Pagan has an oft repeated refrain "Christ in a cream cheese sauce" which I found really odd. Would they have had cream cheese sauces in medieval Jerusalem? I suspect not. Indeed why call your main character Pagan? Would people have been called Pagan then? Did it mean something else? Catherine Jinks is very clever, it must mean something, and I'm just not clever enough to work it out.

There came to be five books in the Pagan series, so these stories of medieval Jerusalem clearly had a broader appeal than I would have thought. I do think that if I read Pagan's Crusade again that I'd like it even more. I'm very glad to have dipped my toes in Catherine Jinks' work, and look forward to reading more of her in the future.

I knew about Jinks' most recent award winning series, but I hadn't heard about this one...and this sounds more like my kind of thing!

I'm not sure about cream cheese, but the folk of the Roman empire enjoyed eating their version of a cheesecake!

Will you be tempted to read the rest of the series?

Yes, it has that Monty Python kind of humor. Quite a good book. I won't read on, but, then again, I never do.