Best in Show is a fabulous exhibition currently on at Orange Regional Gallery. It is an exhibition inspired by Steve Miller's 2012 book Dogs in Australian Art, which is now available in a  new expanded edition to accompany the exhibition.

The exhibition was a wonderful eclectic mix of media, form and style representing dogs in art since the colonial Australia. Visitors were greeted by Smudge on entering the exhibition. 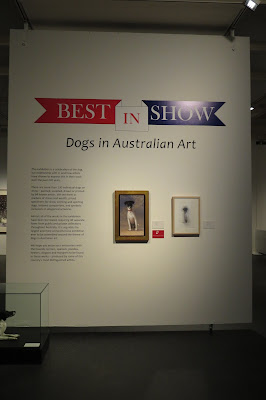 Tim Storrier is a prominent artist from Bathurst. He won the Archibald Prize in 2012 for The Histrionic Wayfarer (after Bosch). It was a particularly controversial win- after all it's difficult to win a portrait prize for a painting that doesn't actually feature a face. It did feature a little dog called Smudge - although I didn't know that at the time.

Poor Smudge was there in person too. 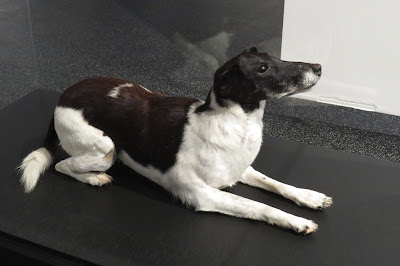 Smudge was a rescue dog previously known as Midgey. Sadly, as Midgey Smudge was owned by a teacher and one day she ate a guinea pig which just happened to be the classroom pet of her owner. And so it was off to the pound for Midgey. Thankfully she went on to greater fame.


I loved this arrangement of dogs by Craig Koometa. 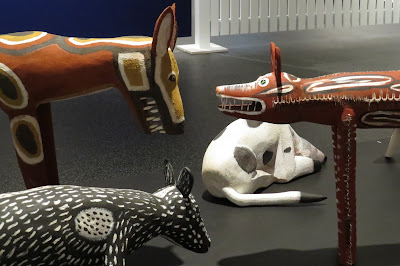 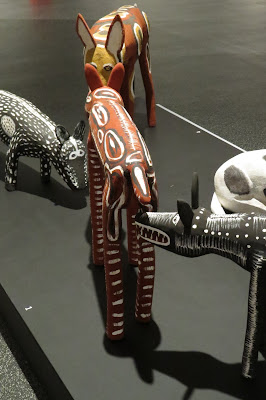 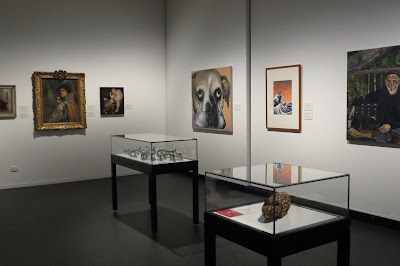 I was interested that there were two paintings referencing the super famous Hokusai's Great Wave off Kanagawa. I laughed out loud to see this one. It's got a fabulous title too. 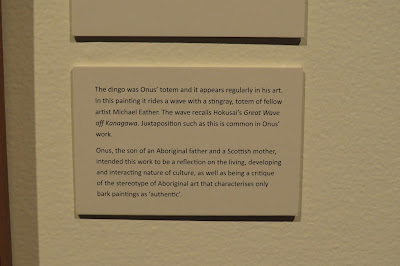 I don't think I've ever seen the wave facing the other way, it's somewhat disconcerting.

It's certainly a unique idea to visit a gallery of dog related art. It's a great one- and one that I wouldn't think of. I loved your pictures!

I love dogs and this would be a dream day for me! Beautiful artwork and I love those wooden statues. Glad you enjoyed it.

What an eclectic exhibition of our canine friend! Eep. love that altered Hokusai painting. ;)

I'm happy they allowed you to take photos. I couldn't in Santa Fe. Huge disappointment.

I've never seen an exhibit like this. So cool!