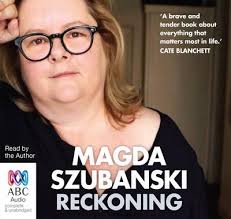 Wow. Everything you've heard about how fabulous Magda Szubanski's Reckoning is, is true.

I listened to the audio book read by Magda herself and from the very first words it is obvious that Reckoning is a treat. Within moments we are thinking of the Polish resistance in World War II, Hieronymus Bosch is referenced, with his famous 15th century painting, The Extraction of the Stone of Madness. Well, I hadn't seen it before, but it's still famous. And rather fascinating. 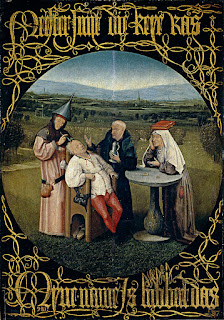 This is no simple comedic memoir. (Although perhaps none of them are?). Magda Szubanski is very well known in Australia for her work in television and comedy over many years. She rather famously came out on television a number of years ago, but is more famous for playing the rather simple Sharon Strzelecki on Kath and Kim. But Magda has really hit her stride with Reckoning. The audiobook read by Magda is sensational. The confidence from her years in performance and television gives us a masterful reading, as she slips effortlessly between the soft Polish and harder Scottish accents of her family.

The first disc tells of the recent death of her father, her own birth in Liverpool, and how her family moved to Australia when she was five because of nylon. She was a cheerful but anxious child, with many traits bordering on obsessive. Magda is intelligent, and bored at school but is fascinated with medicine, and plans to be a surgeon. She is a tomboy, with crushes on Marcia Brady, but is very distressed by shooting a rabbit on a hunting trip with her father.

Magda has a close relationship with both her parents. She describes the life and death of her father in particularly moving ways.

It is as much a struggle to die as it is to live, the letting go of life is no peaceful business and my father's body fought hard to stay.

As with every major life experience we usually can't fully understand or appreciate it until we experience it ourselves.

Billions have been down this path before but we bumbled through as though we were the first.

Her Polish father's childhood and wartime experiences are vividly recounted. Magda isn't sure if she really wants to know his story, if she can cope with the details, the truth of it, but "Someone has to bear witness. But am I the right person for the job? Do I have the stomach to gouge beneath the scabs and clean the wound?"

We were tugboats in the river of history my father and I, pulling in opposite directions. He needed to forget, I need to remember. For him only the present moment would set him free, for me the key lies buried in the past, the only way forward is back.

Of course Magda also tells her own story as well as those of her parents and her Polish and Scottish families. The love of humour she shares with her mother, "I'm not the funny one in the family. My mother is."

But when I was about seven something magic happened- I made my mother laugh.... I knew that I had learned that laugh. I knew that this was a rite of passage and that I had inched closer to being a human and humour was the lifeline. It had got her people through famines and clearances and clan wars. Humour the life force.

For Magda it was to become her life's journey and work as well. It was interesting to listen to her burgeoning career in Australian comedy, her work on classic shows such as The D Generation and Fast Forward, where she was writing with Doug MacLeod. The tales of the making of Babe are fascinating- the Babe of the film was actually 42 pigs!

Magda travels to Poland several times, and also to Scotland. There are fascinating tales of travelling in Eastern Europe in the 80s- East Berlin still existed, and Poland was besieged by queues for everything. I am now particularly interested in seeing her episode of Who Do You Think You Are after her descriptions of the show. Of writing Magda says that "what made you a writer was having the balls to call yourself one. That and a computer of ones own." Naturally she never takes herself too seriously with chapter titles such as Becoming a Fat Lesbian.

However, I do think that it was the section describing her coming out to her parents on a Sunday night in the mid 90s that was among the most extraordinary of this extraordinary book.

Coming out- it sounds like making your debut. But for gay people there was no party, no celebration, no welcoming into the bosom of our family and our community. We came out and then waited for the brickbats. We came out not knowing if, at the end of it, we would still have a family, a community. Some people were convinced it would kill their parents. Some of my friends have been with their partners for twenty years and more and their parents still don't know they are lovers.

That constriction, that inability to be open with the people we love more than anything in the world corrodes the soul. My generation of gay people are sometimes like the walking wounded, as teenagers closeted and terrified most of us never learned to weather the ups and downs of dating. I for one am a classic case of arrested sexual development, and the crucial difference between lesbian, gay, transgender, bisexual, intersex and questioning people and other minorities is this- in every other minority group the family shares the minority status. In fact it is often something that unites them, but gay people are a minority within the family. A minority of one.

It means, among many things that gay children cannot draw on the collective family wisdom about how to deal with their minority status. Noone else in the family has experienced what the gay child is going through. Worse still, all through our growing up, from the instant  we realise that we are gay, we live with the gnawing fear that our parents love could turn to hatred in an instant.

Magda spent 8 years writing this book and it really shows, the writing is just fabulous, Magda can move you whether she is describing a piece of amber or her visit to Auschwitz. Magda visited on a gorgeous summer day, but this moving BBC drone vision was taken in winter.

I loved driving about with Magda talking to me in the car over several weeks. It was such an extraordinary experience that I listened to each disc twice through before progressing to the next, savouring it even though I was keen to keep going. I hope Magda delights us with many more books. My only gripe about Reckoning in the audiobook format is that I know I'm being jilted on the pictures that are in the print book (16 pages of photos). Why can't audiobook people make liner notes like CDs have so that we can see the pictures printed in the book?

I heard Magda talk at the SWF and wished I had listened to her reading of Reckoning. Although, I guess she is such a familiar part of our life thanks to her TV and movies that I could hear her voice throughout the book anyway.

The audiobook is special, yes we know her voice, but it's such a great reading, she does such an amazing job with the accents. It's worth seeking out even if you've already read the book I think.

I loved this book, too—I was moved to tears at times. I read it rather than listen to the audiobook. I've heard her speak and do her parents' accents, and I can only imagine the experience of hearing her reading it!