The Wolves of Willoughby Chase 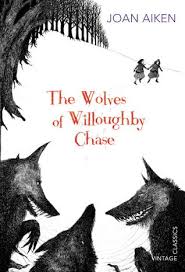 How I wish I'd read this book when I was a kid. I'm sure I would have loved it. I love it now. I didn't know all that much about this book or Joan Aiken before I read this most famous of her books. Joan Aiken wrote over 100 books for children and adults, and it appears she had the most stupendous imagination.

The Wolves of Willoughby Chase has an almost Dickensian feel. Certainly the names are Dickensian,  a lawyer Mr Gripe, the governess Miss Slighcarp and a traveller Mr Grimshaw. A note at the front of the book makes sure we know that it is set in an alternate reality version of England in 1832. Good King James III is on the throne instead of George IV. A tunnel links Dover to Calais allowing hungry wolf packs from the continent to broach the channel and take over the genteel English countryside. Which is particularly clever. I'm not sure why we need the alternate king, there was no political element to this story. Perhaps it becomes apparent in one of the many books that were to become the Wolves Chronicles.

Wolves have been central characters in children's stories for a very long time. Little Red Riding Hood and many other fairy tales have wolves. The Boy Who Cried Wolf. Joan Aiken was fascinated with wolves as a young girl after hearing Balten and the Wolf. There are quite a few new wolf titles this year, most of which sound quite intriguing. Katherine Rundell's The Wolf Wilder and Ryan Graudin's Wolf by Wolf come to mind, but I'm sure I've seen others.

At the beginning of the story we meet Bonnie Green who is impatiently waiting in Willoughby Chase for her new governess to arrive as well as her cousin Sylvia who is coming to stay because her elderly aunt is becoming too frail to look after her. It is evocative and beautifully descriptive from the very start.

It was dusk- winter dusk. Snow lay white and shining over the pleated hills, and icicles hung from the forest trees. Snow lay piled on the dark road across Willoughby Wold, but from dawn men had been clearing it with brooms and shovels. There were hundreds of them at work, wrapped in sacking because of the bitter cold, and keeping together in groups for fear of the wolves, grown savage and reckless from hunger.

The orphaned Sylvia is travelling to Willoughby Chase on the train and there are fantastic scenes of the wolf packs attacking the trains. I was a bit disappointed that the real wolves really only inhabit the first third or so, after which the threats come from more human wolves. It is still an exciting story though with Victorian workhouses, secret passages and intrigue.

I did absolutely adore the numerous, and surprising references to champagne. I do love Champagne even though I am nowhere near as lucky as the two villains of the piece who are condemned because they "drink champagne every day." And when a group are trying to rouse an old woman overcome by malnutrition the doctor advises her needs.

"Firstly, champagne. She is too weak to take anything else at the moment."

Not surprising to me at least that it was marvellously restorative.

Every now and then Dr Field came and administered another teaspoon of champagne, and presently he reported with satisfaction an improvement in the patient's breathing and a tinge of colour to her cheeks.

As well it would. Just like reading The Wolves of Willoughby Chase.

And the vocabulary, it is particularly luscious. Wold. Irruption. Oubliette. Immured. Victuals. It is not surprising to learn that Joan Aiken grew up hearing her mother read Dickens aloud to her as a young girl.  I can see myself reading The Wolves of Willoughby Chase again, and I'm certainly curious to read more of Joan Aiken.

I hadn't heard of this one at all until I entered the blogging world -- I wonder why it seems to not have made it to Australia. An enjoyable read as an adult, but I too wish I'd had these thrills as a child. Have a lovely Christmas -- all the best for 2016.

This is my 2nd prompt to read this book this week. My first promptee assured me it wasn't an animal story. And now you've tempted me with an alternate history story. I believe it's a series as well :-)

I wouldn't have read it except for my 1001 quest either Vicki. It is a shame it's not more well known down under. Thanks for your Christmas wishes - all the best to you and your family, I hope you're not sweltering this year.

Ah the beauty of synchronicity Brona! It's certainly not a soppy animal story- there is a boy who keeps geese that provides some comedic relief at times. And a lovely Vintage Classics version in print- it would be a great recommendation for work. It is a series, although a loosely based series with different settings and main characters.