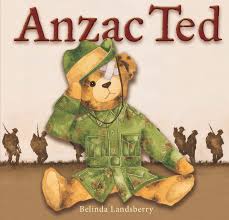 I picked up Anzac Ted from a display at my local library a while ago. I'd not heard of it before but was interested in the many books that have been written about the Centenary of Gallipoli, and it has an appealing cover. It has an appealing inside too.

Anzac Ted is told in a somewhat unexpected rhyme for a war story.

Anzac Ted's a scary bear
and I can tell you why.
He's missing bits, his tummy splits,
he only has one eye.


Anzac Ted is the beloved toy of a young boy, but he's more than that- he's a bear with a history. He belonged to the boys grandfather, and Ted was indeed an Anzac who went to war with Grandpa Jack. The other children in the boy's class can't understand Anzac Ted's importance, they can't see beyond the exterior to see his significance, importance and truth.

Belinda Landsberry is a first time author/illustrator with Anzac Ted. She won the Kids Book Review Unpublished Manuscript Award in 2103 for another title, Where Do Odd Socks Go? which sadly doesn't seem to have been published yet.

She's done a great job with the illustrations for Anzac Ted- particularly the sepia toned war time ones. 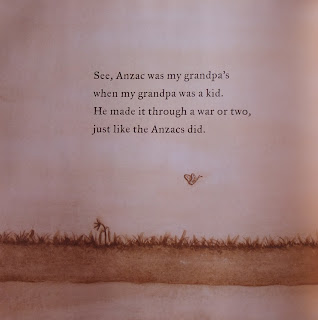 Anzac Ted is the second book that I've read recently from the newish published of children's picture books, EK Books. The first being Don't Think About Purple Elephants (review coming soonish). I think they're off to a flying start, and fulfilling their mission to publish outstanding stories with meaningful ideas as their essence. I will look forward to reading more of their books.