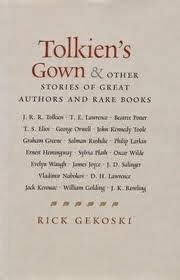 I found this book in my local library catalogue when I was searching out stuff about Lord of the Flies which I read a few months ago. I've heard Rick Gekoski interviewed on radio before, and was always impressed by him, so I thought I'd have a look at the book, and just read the bits about Lord of the Flies. Well, you can be pretty sure that didn't happen. The chapter on Lord of the Flies was so amazing, that pretty soon I was cruising the other chapters too. Eventually I gave up and read the book front to back. Which is possibly not the best way to read it. But it works just as well.

Rick Gekoski is quite an amazing man. Rare book dealer. Author. Columnist at The Guardian. All round learned guy. "Tolkien's Gown traces the publishing history of twenty significant modern books, each of which is sought after by collectors of first editions."

in a lifetime spent with books, what has often fascinated me is how easily even the most famous of books could have been other than what it is. Authors rewrite compulsively, and are never sure when a manuscript has found its final form. Editors and publishers, even friends, often have an immeasurable impact on the final form of a text. So a published book, frequently, is a collaborative effort, to which on the name of the author is eventually attached.


There are wonderful tales about each and every of these twenty books, all peopled with extraordinary characters. Tolkien's Gown began as a radio series on BBC 4, Rare Books, Rare People. Twelve of the chapters were originally broadcast there. They have been updated and expanded for the book. Somewhat surprisingly for me, I've read quite a few of the featured books. Lord of the Flies. Lolita. The Hobbit. The Picture of Dorian Gray. The Catcher in the Rye. Harry Potter and the Philosopher's Stone. The Tale of Peter Rabbit. Sons and Lovers (well, I read about the first 7 pages in high school, the longest 3 hours of my life).

Others I've heard of of course but not read- On the Road, Ulysses, Animal Farm, Satanic Voices, A Confederacy of Dunces. Seven Pillars of Wisdom. And there was a few I'd never heard of at all- Hemingway's first book- Three Stories and Ten Poems, Sylvia Plath's The Colossus, T.S Eliot's Poems (1919), Philip Larkin's High Windows (there's a bit of a poetry theme here it seems), or Graham Greene's After Two Years.

Each chapter was fascinating though in its own right. There are lots of amazing facts:

On The Road was written on a 120-foot long roll of teletype paper.

Tolkien admitted that Beowulf was a major source for The Hobbit.

Ulysses was published in chapters, 'episodes', to provide Joyce with a cash-flow while he was writing it.

But Rick tells stories, and doesn't just list facts. He has a delightful turn of phrase and is a pleasure to read. The discussion of each and every book was broad ranging and expansive, universally fascinating- even those I hadn't heard of before. Rick uses lots of cool words, like capacious, mephitic, rakish and jejune. He is marvellously opinionated at times. Rick is also well connected to the rich and famous, with customers like Julian Barnes and Bernie Taupin. He lived upstairs from Tolkien for a while at 21 Merton Street, Oxford. He worked with the "somewhat resistant and truculent" William Golding on a bibliography of his works. He seems to hang out with Dame Edna, including his author photo inside the back cover.

Rick has some interesting thoughts about children's books in his chapter on the Tale of Peter Rabbit.

That's the problem with children's books. Children handle them, with grubby little hands. They love the rhythm and repetition of the same story, read over and over until they know it by heart. Rereading is one of the delights of childhood. It makes the world safe and predictable, but it's murder on the books.

… collecting children's books, which is a form of nostalgia engaged in largely by the middle-aged, intent on recapturing some of the magic of childhood...


I'm very keen to read more by Rick Gekoski. Even if, gasp, Rick seems to be moving away from reading actual books.
Posted by Louise at 17:30

Wish this was in my library catalogue. I suppose I shall have to break down and buy it.