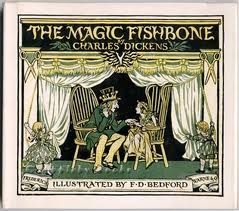 Well, what a funny little book this is!

One of Charles Dickens's lesser known works. I'm not the biggest Dickens scholar it must be said, but I wondered if it was one of his earlier works, but it is actually one of his later works, written in 1867 (he died in 1870).

A rather bizarre book. Princess Alicia is the oldest child of a rather poor king, King Watkins the First, and his queen who have a rather astonishing 19 children from 7 years to 7 months.

The Fairy Grandmarina, an old lady "dressed in shot-silk of the richest quality and smelling of dried lavender", comes to visit King Watkins at the fishmonger, after he buys a pound and a half of salmon. She directs the king to share the salmon with Princess Alicia and to give her a fish bone- and that she must dry it, rub it and polish it until it shines like mother or pearl. The fish bone will then be magic, and grant a wish, provided she wishes for it at the right time. 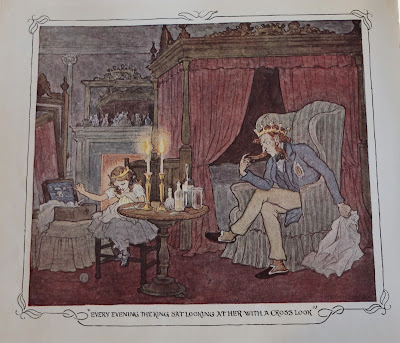 I did love that the queen swooned her way out of the story really. Princess Alicia of course revives her mother the queen with smelling salts. And I don't know that you can end books these days by choking the annoying little dog, mores the pity....

I was lucky and found a lovely old edition illustrated by FD Bedford and published in 1921 at a local op shop.  It has clearly been loved, or at least used by some previous child readers as they have coloured in some of the line drawings in the book. 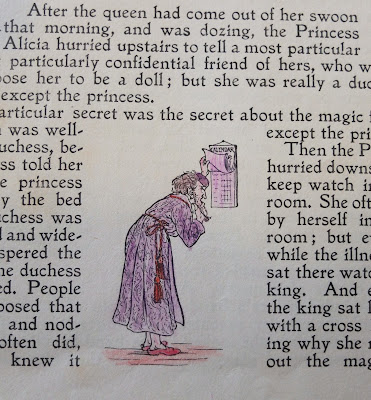 I must say that I haven't read this, but it looks very pretty! Dickens was such a versatile writer.