In September I was lucky enough to go to Launceston, Tasmania for a conference. I wasn't there all that long, but had a very enjoyable few days, and got to see some new birds.

Tasmania is a funny (small) place, and I was lucky enough to have the same cab driver 3 times! The second time was planned, but the third time was pure luck. Anyway, Paul told me that Tasmanians call these birds Turbo Chooks (turbo because they run really fast, chook is Australian for chicken). More properly called the Tasmanian Native Hen (Gallinula morterii). They were certainly plentiful in the nice lake across the road from the conference centre, and also by roadways. Turbo Chooks used to be common on the mainland too, but sadly went the way of most flightless birds when man, and their accompanying predators move in. 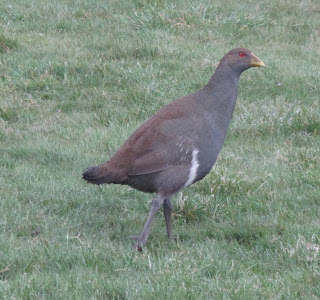 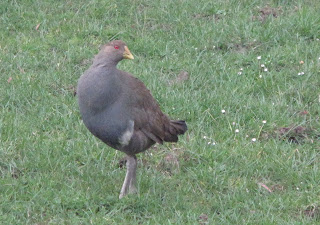 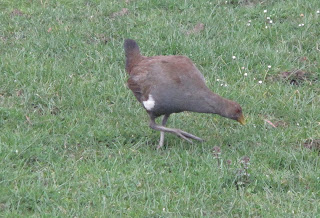 After a day or so (yes I'm very quick sometimes), I realised that some were juveniles. 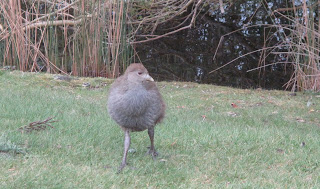 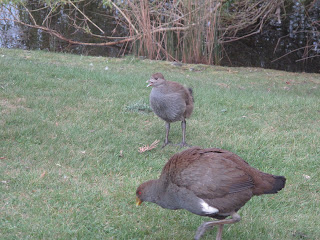 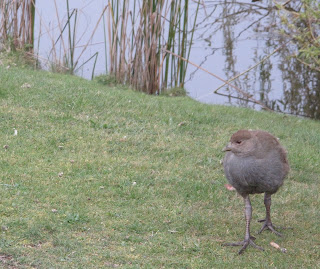 Saturday Snapshot, is a wonderful weekly meme from at home with books
Posted by Louise at 18:39

I don't think I'd ever figure out some were juveniles.
They look like fun.
Tasmania sounds so exotic...
And very far away

They look like compact chickens :) They have a great name, too. 'Turbo Chook' - heh love that.

I love the sound of Tasmania...and this chooks are intriguing. Thanks for sharing.

They look like they need to grow into their feet!

Interesting! I'm going to have to see if I can find a video of them running.

Anne@My Head is Full of Books

LOL - I love that you call some juveniles :)

They are very cute! Thanks for sharing the photos and story with us!

The youngsters are adorable with their cute little baby faces.

Turbo Chook is a great name! I guess their long skinny legs help them run fast! In the first couple of photos the turbo chooks have very red eyes, so unique. In the 5th and 6th photos there are 2 chicks but only one bird in each has the red eyes, I wonder if that is a sign of its gender?!

It's sad that they aren't common on the mainland anymore

Tasmania is on my to visit list. My son was researching the Tasmanian Devil just last week as part of a project. The Turbo Chook looks very interesting.

Nice photos. The birds are cute, in an odd way. I'd love to visit Tasmania.