My recent post on Top Ten Christmas reading that I had (largely) done, inspired me to do some seasonal reading this year. A chance to catch up with some old favourites- interesting how I can enjoy rereading things now- re-reading is only something that I've come to very recently.

The first book that I was keen to re-read was John Julius Norwich's perfect The Twelve Days of Christmas [Correspondence]. This little gem of a book can be read in mere minutes but stays with you much longer. A wonderful example of the Christmas espistolary form in response to stalking. A series of letters written by Emily to her beau Edward as he showers the gifts from The Twelve Days of Christmas upon her. Emily becomes increasingly frantic when the unrequested bounty arrives at her door. Until I read this book I don't know that I actually appreciated exactly how many birds her true love bestows on her during the song.

Actually, I'm just beginning to discover how many versions of The Twelve Days exist out there. Classy ones like Frederica and Kathleen. Bob and Doug Mckenzies's Canadian Hoser versions (oh the memories!). Farting Elves. And the religious significance. And that it is used as an economic indicator- the Christmas Price Indicator.

My second book was Lemony Snicket's The Latke Who Couldn't Stop Screaming. A Christmas Story. I'm not Jewish, and haven't had much exposure to Jewish culture and traditions. I have vague notions of what latkes may be, but have never knowingly eaten one. I have had the occasional potato cake, and even one entitled rosti, but never a latke.

I'm not quite sure what to make of this book, or how to take it. It's subtitled A Christmas Story but is more about Hanukkah, and how that isn't the same as Christmas. In my ignorance I didn't know a lot about Hanukkah either. I knew about the Mennorah, and that a candle was lit each night, but not what this symbolised. Now I do.

The book does a rather annoying thing a few times. It uses a word that is so clearly above the level of it's intended readership that it has to directly define it in the text. I've never quite understood this as a writing technique.

.....but instead they heard a terrible noise from a certain cottage in the neighbouring arrondissement, a word which here means "place where something was  being born."

Which isn't at all what arrondissement means at all as far as I know. Arrondissement is of course inextricably linked with Paris. And so it's one of my favourite words, but if the kids who read the book aren't going to know what an arrondisement is, then don't use the word. And don't use it, and then define it, wrongly. I have moderately strong mixed feelings about this book. 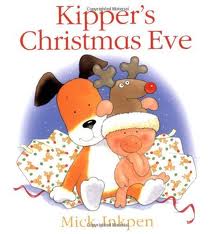 A cute Christmas story for the younger set, or a Kipper fan. Kipper is a lovely dog by English author illustrator Mick Inkpen (which is really a great name for his profession I should think). The original book is very clever, wonderful illustrations, who would have thought that a cartoon dog could express wry amusement and other non-traditional dog emotions? But it can.
I didn't find Kipper's Christmas Eve quite as successful. Although it does have a great start with Kipper wondering if Christmas Eve is better than Christmas. Are presents better? Or the expectation of presents? It's an interesting question to ponder. Certainly planning and expectation are half the fun of lots of things. Presents. Holidays. A lunch out. I think I probably prefer the expectation too.
The rest of the story is ok, and I'm sure Kipper fans would like it. I'm not sure why he is a dog named after a fish, but he is. I suspect it's not one of the better Kipper books.
Posted by Louise at 22:44

So many Christmas stories and I've read so few. But I remember a very funny film version of The twelve days of Christmas .... I did a Google search and there are a lot out there now (you know, like Garfield's Twelve days, and so on!) but that first one I saw was such fun.

Oddly, this year I've not read much of anything Christmas-y. I checked out a huge (more than fifty books!) stack of Christmas titles and started to read them, but they all felt like they were running together in my mind. All the meeting-with-Santa stories and sweet-Christmas-when-I-was-poor stories and another-version-of-12-days-of-Christmas stories. Could not get into these this year.

@Sue- what was the funny 12 days of Christmas? The Garfield one? Don't think I've seen that. Will have to check it out.

@Debbie. I've never really done a big Christmas reading before, but am reading quite a few (well what I think is quite a few, it certainly won't get anywhere near 50, and probably not more than 10). Still it is a bit fun. I've packed a heap to take away for the Christmas break too- hopefully some more seasonal posts coming soon.