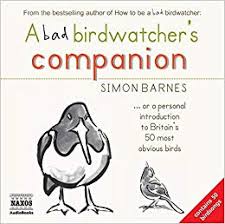 I listened to this very delightful audiobook recently after I saw Aimée Anders talking about it on her lovely book tube channel. Aimée is Dutch, and we often have quite similar interests including bird books. I was soon seeking this book out on Audible. I'm so glad I did.

Simon Barnes is nothing like a bad birdwatcher to my mind, despite his best efforts to deny it.

I certainly feel that lift of the heart, and I certainly am a bad birdwatcher- by anyone's definition, not just Simon Barnes'. My name is Louise and I am a bad birdwatcher. I didn't know what a rachis was, or even how to spell it- I had to go to Amazon and Look Inside a text copy of this book to work out how I might even try to spell it. I did know that supercilia had something to do with eye brows.


We are drawn to birds because above all else they can fly.

The subheading .... or a personal introduction to Britain's 50 most obvious birds, gives a more obvious clue to the actual content of the book beyond the foreword. Simon Barnes gives us a bird a chapter for 50 chapters, helpfully divided in to section as to where you might find them - Garden, City, Sky, Seaside etc. The final section is Pilgrimage Birds, those birds that are worth travelling to the "cathedrals of wild Britain" to see - avocets, Bewick's swan and bittern amongst them. Each chapter begins with a little handy guide to help bad birdwatchers see each bird.

Robin
Where to look: gardens, spade handles, Christmas cards
When to look: all year
What to look for: red breast
What to listen for: thin, pretty song

Then because of the magic of audio were are treated to a snippet of their bird song. This quite often alarmed my dog if I was listening to it at home. I was most excited to hear the whoom, whoom of the booming bittern. I so need to hear that for myself. Australasian bitterns boom too, but it's a bit different.

Even though this an English book about English birds, I was actually familiar with a goodly number of them at the start. Many of these very common English birds - blackbirds, sparrows, pigeons and starlings etc - were introduced into Australia, brought by English settlers in the nineteenth century to bring a piece of home with them. That goldfinches were popular cage birds in England in the eighteenth and nineteenth centuries is most certainly why I have been able to watch them out of my kitchen window in Australia.

Simon Barnes is a skilled journalist and author and a wonderful English sense of humour flows through the whole book.

Mallard
Where to look: any bit of water, once seen in trios over mantlepieces, now almost extinct in this environment
When to look: all year
What to look for: green head, orange feet
What to listen for: quack, quack

That's not to say that there are not some serious discussions, on the distressing nature of nature, and human activities. I realised a number of years ago that pretty much every living creature gets eaten by some other living creature. It can be rather visible with birds.

I have received many a heartrending letter from nice people who put out food for the birds and then feel guilty when a sparrow hawk bursts in and takes a blue tit just as he's tucking in to the peanuts. I sympathise with the distress, but blue tits eat caterpillars which is not all that pleasant for the caterpillars. It's not nice, no, but then as I've said before the fact is that nature is not nice. Beautiful, thrilling, challenging, enthralling and altogether wonderful yes, but nice no.

Sparrow hawks eat nice birds just as lions eat nice antelopes. Both sights can be distressing I know, I've seen both in extraordinary detail. It is all the sadder when the sparrow hawk fails to kill the bird with his first attack, as is quite often the case. His victim must then die a piteous and protracted death during the plucking and the eating. Still, that is the way that life works and anyway the blue tit whatever else you can say has certainly lead a better life than a battery chicken. Humans are much crueler than sparrow hawks.

The chapter on pheasants is particularly fascinating in this regard.


Pheasants are ground birds by inclination, they run well and forage on the grounds for seeds and insects, they're not fussy feeders and they'll take a wide range of food. That makes them relatively easy to keep and means that the wild and semi-wild birds don't find it hard to survive.... They might have evolved to please a man with a shot gun. They get up to fly with great reluctance and when they do they keep low because they have heavy bodies and do not have huge stamina. Thus a flushed pheasant becomes an instant target for what some people refer to as sport. Personally, I can't see the pleasure in blasting fat, half-tame birds to bits, especially when they're incompetent flyers.

Pheasants are of course an introduced species in the UK, introduced before the Normans, and the preference of pheasants for sheltering in copses and small woods has meant that these areas have been left to break up the farmland of rural England, helping preserve biodiversity.


.... without the blood lust for the lovely ungainly pheasant we would have a greatly impoverished countryside.

I had no idea that pheasants were reared artificially and released to the wild for this sport. "Pheasants are perpetually doomed birds, and they have given the countryside life."
I also had no idea that there are (incorrect) theories that magpies are responsible for the decline of song bird populations in the UK. Hint- "it's mostly to do with changes in farming practice".

Nature does not exist in order to seek the moral approval of humankind. It is about surviving, breeding, and the ultimate goal of becoming an ancestor.

Or that the Great Crested Grebe was known as Arsefoot in the sixteenth and seventeenth centuries because of the relative placement of their feet to their um, arse.

Simon Barnes is endlessly encouraging for us bad birdwatchers to get out there and look at birds, and I greatly enjoyed his enthusiastic narration.

A growing interest in birds is rather like looking for stars at dusk on a frosty night. The more you look, the more you see.... The birds were always there, but when you become a bad birdwatcher the world is made new again.

Learn to listen and there will be so many more birds in your life.

Peregrines are perhaps the ultimate pilgrimage bird, and they are an inspiration. An inspiration to carry on, to see more birds, to enjoy birds more, to enjoy life more.

To write this post I got what I thought was the physical book of this audiobook from my library, but it turns out it was an earlier, related Simon Barnes book - How to be a bad birdwatcher. I will of course need to read that now too. I am becoming more and more convinced that actually finishing a book does nothing whatsoever as to actually decreasing the reading you have ahead of you, instead it actually increases the number of books you want to read.

I expect that I'll listen to A bad birdwatcher's companion again, hopefully before a trip to the UK sometime soon.
Posted by Louise at 11:03

You know, I haven't seen a goldfinch in years. There's not even many sparrows around now, except for right in the middle of the city. What we do have is rainbow lorikeets, that we used to have to travel to Queensland to see. I was surprised to learn that rainbow lorikeets were native to Melbourne- I'd always assumed that they were a tropical species.

I'm definitely a bad birdwatcher - and I enjoy it.
After I read your post I listened into the audio book sample on amazon - I really liked it! And I thought I'm not into audio books. Maybe this will change...

Janine- I know sparrow populations are changing worldwide, I'm not sure why that should be. I hadn't seen a goldfinch until I became interested in birds - and then there they were in my own back yard.

Deb- they're endlessly fascinating once you notice them. And there's always something to look at.

Carola- I hope it does change audiobooks for you. They're great once you get into them. You can listen in the car, out walking the dog, while doing the dishes....