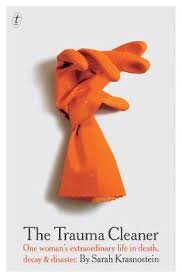 The Trauma Cleaner is having a moment just now. It's doing very well in sales, has a 4.07 Goodreads rating, and has won or been shortlisted for many major awards already. I saw author Sarah Krasnostein at the Sydney Writers Festival recently, so I picked up the book in the week before. Of course I didn't finish it til the week after, but I was glad that I'd made a start on it before our early morning session.

Biography isn't a genre that I take on all that often, I find memoir more appealing I guess. But Sandra Pankhurst, the trauma cleaner of the title, is a particularly fascinating biographical subject. She was born a boy called Peter and adopted into an abusive family. Peter married young and fathered two children before leaving his family behind, coming out as gay, and later becoming one of the first gender reassignment patients in Australia and marrying again in later life as a woman.

Those family factors alone are interesting enough without the jobs that Peter and then Sandra worked along the way. Including drag queen, prostitue, funeral director, hardware shop owner before becoming a specialised trauma cleaner dealing with the houses of hoarders and crime scenes. It all seems like enough to fill more than one life.

As a biographer Sarah Krasnostein had her work cut out for though, as Sandra is a very unreliable historian.


She is in her early sixties and simply not old enough for that to be the reason why she is so bad with the basic sequence of her life, particularly her early life. Many facts of Sandra's past are either entirely forgotten, endlessly interchangeable, neurotically ordered, conflicting or loosely tethered to reality. she is open about the fact that drugs have impacted her memory. ('I don't know, I can't remember. The lesson to be learnt is: Do not take drugs, it fucks your brain.') It is also my belief that her memory loss is trauma-induced.

Of course cognitive impairment can happen in your sixties, but it is not just minor details that have slipped from Sandra's memory. She can't remember "the year of her marriage or whether she had a wedding reception or the births of her children or the details of her divorce or the year of her sex reassignment surgery." Major, major life events. In fact, the major events of a life. Sarah writes a very sympathetic version of Sandra's life.


Using words as disinfectants, we are trauma cleaning. Word by word, sentence by sentence, we are reuniting fragments scattered by chaos to create heat and light.

But nothing here is sugar coated. Not Sandra's life, or her work. The named chapters relating Sandra's work with horders are particularly interesting. The description of the mess, the chaos, the smell.


I hang back, sapped for a moment by the smell. Hanging over everything is one of two smells (the other being death) that I will discover and come to know during the time I spend watching Sandra at work: human dirt at close quarters over time. We have no single word for it, this smell. We have no adjective to describe how profoundly repulsive and unsettling it is. It's not just human effluence or rot, nor is it a simple matter of filth or grime or feculence of unwashedness.

Sarah goes on to wonder if we used to have a word for it in "less hygienic times". I found these passages on smell particularly relatable as I know that smell. I really know it. I have come across that smell in my line of work many times. It is indescribable, but distinctive. It was revelatory to consider it "equally the ineffable smell of defeat, of isolation, of self-hate. Or, more simply, it is the smell of pain."

As a young adult I found Peter both courageous and cowardly. Courageous, or foolhardy, perhaps, to wear makeup to work in a flour mill in the early 1970s (even now I should think), but cowardly to lead a secret life while married to his young wife. Leaving her at home with the kids while he went out to gay nightclubs, taking drugs and being repeatedly unfaithful to his wife. My sympathies lay much more with his wife Linda during these sections. Peter is acting as if he doesn't have a family, and he eventually leaves Linda with nothing, and two children to raise.

There is a chapter detailing a horrific rape that Sandra suffered at work that was particularly difficult reading. I've never read such a graphic account of a sexual assault- that term alone seems inadequate to cover the brutality of this attack, and almost sounds sanitised. Rape is a much more honest term for what happened to her.

The Trauma Cleaner is mostly told in alternating chapters. Numbered chapters dealing more strictly with Sandra's story and named chapters showing Sandra at work with hoarders (Sarah wasn't allowed to report on the crime scenes). Sandra show tremendous compassion and empathy with her clients, both as a way to get the job done, but also just in the understanding way she treats people. At times I got a bit lost stylistically, but that was relatively minor and didn't effect my overall enjoyment of this rather unique book.

Thanks for this Louise. As you say, we reacted similarly to the book. I enjoyed the trailer and the profile on Sandra as I hadn't gone looking for any of these.

I keep to-ing & fro-ing about whether I can read this or not. You’ve made me think that I can.