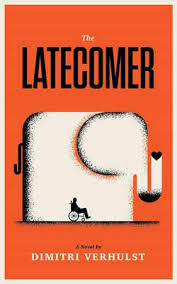 I happened upon this delightful little book when I was browsing in my favourite Basement Books recently. It's tiny (139 pages) and it had the look of a book in translation and so curious I picked it up. Indeed it is a book in translation. Dimitri Verhulst is Belgian, and writes in Dutch. I'd never heard of him, or this book before.

So, I opened it up and read the first paragraph standing there in the aisle.


Although it's completely deliberate, night after night, I loathe shitting in bed. Debasing myself like this is the most difficult consequence of the insane path that I've taken late in life. But holding back in my sleep could only arouse the suspicions of my carers. If I want to continue to play the role of a senile old man, I have no choice but to regularly soil my nappies. Because that's what this is: a role. I am nowhere near as demented as those around me believe!

Right. Someone is faking dementia. I'm in. I turned the page, and snorted to myself while reading the second page. It's in the basket. Yes I need a basket when I shop at Basement Books...

I've probably only read a handful of Dutch books, or books written in Dutch, in my life. So it's kind of funny that the last two have been the first person point of view by old men in a Dutch nursing home! That can't be a genre can it? And I loved both of them. I remember The Secret Diary of Hendrik Groen 83 1/4 Years Old very fondly (see my review), can it really be two years ago already? Both are first person narrations by somewhat curmudgeonly old men.

Here Désiré Cordier is in his early 70s when he starts faking dementia. He lives with his wife Moniek and they have two adult children.


People my age don't have Facebook or other sociable computer whatnots to cheat loneliness; no, we bump into each other in real life with gruesome frequency a funerals, the most natural occasion for us to maintain contact with our diminishing outside world.

He has a lot to say about ageing, dementia, older people, and the care in nursing homes.


Recently my most faithful companion has been, somewhat surprisingly, a dog. Pablo by name, even though many of the residents address him with the name of the dog that played a role in their own past and has been buried for decades in the vegetable garden of a residence that will soon be divvied up between relatives who are united only by their mutual loathing.

Désiré saves even more of his scorn for his wife and marriage. And religion comes in for a good swipe too.


But a person - and I'm talking about myself here - who grew up in a society in which religion went unquestioned and considers his agnosticism an achievement, the product of deep and courageous thought, can only feel ridiculed by having the label 'Catholic' stuck to his forehead. I felt philosophically swindled by my lawfully wedded wife and regretted not being able to step out of character for a minute to point this gruesome misrepresentation out to Winterlight's nursing staff. It annoyed me immensely, being henceforth noted down on death's waiting list as a believer. The first rattle in my throat or tiniest bit of coughed-up blood will have a priest scurrying to my bedside with a breviary and an aspergillum.

There were a couple of minor medical errors that other readers possibly wouldn't notice, but my joy was compounded when Désiré was taking a Mini Mental State Exam as part of his diagnosis.

I am most intrigued to read more of Dimitri Verhulst. Thankfully my library has two of his other books. Madame Verona Comes Down the Hill and The Misfortunates, which seem to be his most famous books. And both are under 200 pages. Perfect.
Posted by Louise at 10:10

Labels: Books You've Never Heard Of But Just Have to Read, In Translation

Isn’t it wonderful what you can find on the remainders table? I discovered SF novelist Mack Reynolds(who, among other things, wrote the first Star Trek novel, I don’t care who says it was James Blish - it was for children, so probably “doesn’t count”) for 25c. I discovered Olson Scott Card’s Ender’s Game($1.00). Lois McMaster Bujold. Many others. If it’s cheap, you are willing to give it a go. A long time since I saw a remainders table, though, Dymock’s doesn’t have one. There’s Book Grocer, but they keep popping up, closing down and moving somewhere else. I only ever find one by chance.

I love the thrill of discovery too. I enjoy a Book Grocer too, but usually only buy one or two at a time, Basement Books is much more dangerous for me.