I recently had (yet another) fabulous trip to Melbourne. I did lots of fun things, most of which I haven't told you about yet... Although I have described the fun of the Opening Night of the Melbourne Writers Festival.

I always have a great time in Melbourne, mainly because there's so many great things to do (checkout my Melbourne label), and generally I get to eat some fabulous things not available in small town Australia as I catch up with friends. There was a lot of catching up this week, and a lot of non small town things eaten.

One of my first priorities in Melbourne eating is Yum Cha. I love, love, love yum cha. And am sadly deprived of it year round where I live. So I take every opportunity when I'm in the big smoke. One trip to Melbourne we did five yum chas in a row! Even I needed a break after that, and my stalwart friend was begging for mercy.

This time round I managed two yum chas and a night time dumpling fest. Not bad. Not bad at all.

First stop was to long time favourite Shark Finn House in Little Bourke Street. Hmmm, there doesn't seem to be enough pictures I'm sure we ate more than this ...

The following day we tried the relatively new Tim Ho Wan on Bourke Street. Even though they have four locations in Sydney I'd never made it to any of them. I think I'll have to now. I loved everything.


The Baked Bun with BBQ Pork was apparently the reason for the Michelin Star awarded to the original Tim Ho Wan in Hong Kong. It was amazing. Crispy outside - a texture unlike anything we'd had before. 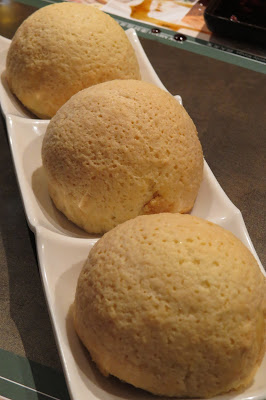 The desserts were most unusual, completely new. We decided not to google the ingredients until we'd eaten the jelly. Turns out Osmanthus is a flower which can be made into a tea.


What would you want for dinner after yum cha in Melbourne except dumplings? We've been to a few dumpling houses over time, this time we went back to Shanghai Dragon Dumpling House on Russell Street. I can't remember all that we had. 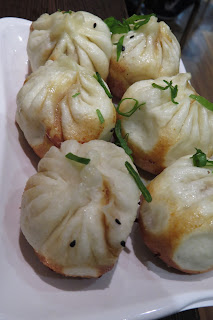 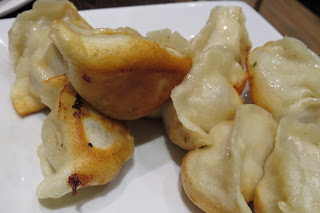 It's always crazy cheap at a dumpling house. Less than $30 for a meal for two which we couldn't quite finish.

So glad you like Yum Cha! I grew up with these little dainties during my childhood years in Hong Kong. We call them Dim Sum here in Canada, and we have lots of these restaurants here in Calgary, and if one wants more, head west to Vancouver. Hope one day I can make it out to Melbourne. From your blog I know how marvellous a place it is. And hope too, that you can come visit Canada. ;)

So delicious! Those would go well with my Blushing Geisha!

I am currently watching, and loving, a show on Netflix set in Melbourne. (Offspring).

Arti, I really do love yum cha. I've heard the difference of name explained that yum cha is the meal, but dim sum is the individual dishes ( I think it's that way round), is that right? I'd love to get back to Canada one day- I lived in Edmonton and Vancouver way back in the 80s, and haven't been back since 1991, it's a bit overdue I'd say. Melbourne's fab, although Sydney's good too.

Laurel- Rain- how funny to think of you watching Offspring up there! I had no idea it was on Netflix. I've never really watched it here. I'm going to have to try a Blushing Geisha sometime soon.

You are speaking my language! Drooling over all the goodies your ordered. I hear you on those vermicelli rolls. Love all of it!

dim sum or yum cha -- I don't care what you call it, as long as you serve me some. LOL.

The Asian restaurants I am familiar with only serve Dim Sum in the daytime-- including many of the dishes in your beautiful photos. I especially like one restaurant that's in Virginia in a suburb of Washingto D.C. It's amazing how universal Chinese food has become!

Your meal looks quite yummy. Here in northern California we call these dishes Dim Sum. I am very fond of all the exotic (to me) names and ingredients in most of the dishes. We always order way too much, but its hard to resist.

What a fascinating and delicious looking meal! The dumplings look amazing and the Baked Bun with BBQ Pork has my mouth watering. Sounds like an amazing meal and a fantastic experience!

It all looks good to me!

Oh my! Those dumplings are about as beautiful a food as I have ever seen. And all those other gloriously lovely foods. Oh my!

I'm more fond of the fried dumplings than the soft ones - which is less healthy I guess. Have a great week. Cheers from Carole's Chatter

Ohhhh I love the dumplings with soup inside, almost as much as the ones with green tea inside them!
But sadly, I've only ever eaten dumplings at Lotus (two venues in Sydney) and the night noodle markets in Hyde Park each year. You put me to shame!

Sadly, the boys are extremely unadventurous with their food, so things like Yum Cha can only be done when Mr Seasons & I have time to ourselves.

I'm not much of a dumpling fan- although my family is. Those golden tofu bites look great.

I would not have to eat for three days if I were there!

this looks delicious. We have an amazing dumpling place near us-that I love dining at. This past weekend I discovered a new Chinese restaurant that was quite good and cheap.

I did not know you lived in Canada-how did you end up there?