Letter to D. A Love Story 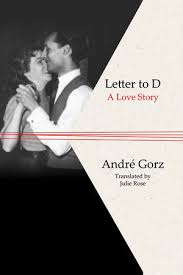 I like hanging out in used book sales. You never know what you're going to find. I'm always on the hunt for the obscure and out of print titles for my 1001 quest. And sometimes you find little gems like this one. I totally picked up this book and put it in my bag because of the little words, that you can't really see in the image above, in the bottom left corner of the cover. The Love Letter That Captivated Paris. Well, anything that captivates Paris will captivate me. Rummaging around the house recently I found it sitting on a pile of books, and picked it up for a Paris in July read.

André Gorz was a very prominent French thinker and journalist. Born in Vienna as Gerhart Hirsch in 1923, his career took off after the second World War. He was friends with Sartre and de Beauvoir, and published his writings under several names. But he was to become best known for one of his final writings, the beautiful and moving Letter to D, a personal reflection looking back on his 58 year relationship with his wife Dorine.

You're 82 years old. You've shrunk six centimetres, you only weigh 45 kilos yet you're still beautiful, graceful and desirable.


Gerhart Hirsch met the young Englishwoman Doreen Keir in 1947 at a poker game in Lausanne, Switzerland. He was immediately smitten.

You were striking, witty and clever, beautiful as a dream.


Even though Doreen's friends warned her off Gerhart "He is an Austrian Jew. Totally devoid of interest", she accepted his offer to go dancing a month later, and they were quickly inseparable.

We were  both children of precariousness and conflict. We were made to protect each other from both. We needed to create together, by being together, the place in the world that we'd originally been denied.

They lived a fascinating life. Gerhart was to find fame as André Gorz and Michel Bosquet, writing for Paris-Presse and L'Express. The couple moved to Paris in 1949 initially living in a room on the Rue des Saints-Pères (6th) leant to them by a friend for three years. They then moved to "two little attic rooms separated by the landing in an apartment block in the eleventh arrondissement." But they were not as happy there.

Up until then, we'd lived in poverty but never in ugliness.


Doreen became sad because of their location.

You felt personally like you were in exile in that part of town. When you didn't come in to the paper, you were lonely, cut-off. You didn't see your friends nearly as often, now that they were a good half-hour away by metro. Whenever you left the house, wherever you went, there was nothing but deserted streets, dusty shops. You became sad.


After a few unhappy years in the 11th they found a "small run down apartment" on rue du Bac (one of my favourite streets from my 2013 visit when we stayed nearby, Jacques Genin was one of the many highlights, although rue du Bac would have been very different in the 1950s). They felt they "lived at the centre of the universe".

André felt that he had left Dorine (Doreen had Frenchified her name- is there a better term than Frenchified? Anglicised seems a proper word, Frenchified not so much) out of his writings, it was "eating away" at him.

Why is there so little of you in what I've written when our union has been the most important thing in my life?

He felt that he had misrepresented her in The Traitor, "an image that disfigures you". Letter to D sets out to correct these perceived short fallings. It was written towards the end of their lives.

You gave all of yourself to help me become myself.


Dorine was unwell for decades having developed painful arachnoiditis following an intrathecal injection of Lipiodol to image her back in 1965.

You could no longer lie down, your head hurt so much. You'd spend the night standing on the balcony or sitting in an armchair. I'd wanted to believe that we were together in everything, but you were alone in your distress.


Letter to D was published in France in 2006 when Dorine was terminally ill.

At night I sometimes see the figure of a man, on an empty road in a deserted landscape, walking behind a heard. I am that man. It's you the hearse is taking away. I don't want to be there for your cremation; I don't want to be given an urn with your ashes in it.


André  never did receive that urn as he and Doreen died together of lethal injection at home in September 2007. They left a note on the door for the cleaner. "Warn the police station. Do not go upstairs." Dorine had agreed to the French publication of Lettre à D on the condition that it not be published in English until after her death. In a note by translator Julie Rose she felt that translating Letter to D was harder than many other translations she has done of "difficult, elaborate books by France's leading intellectuals".

It is so simple on the surface, so tight, yet so emotionally complex, that the tiniest false note rings out like a gong.

She's done a lovely job with it. It's a beautiful read.

Labels: Books on France, Books You've Never Heard Of But Just Have to Read, Dreaming of France, In Translation, Paris

Thanks for the lovely review! I love the caption "The love letter that captivated Paris". It certainly captivated me. And now, I am off to hunt for a copy of this down....

What a sad but beautiful story. A good second hand find.

Thank you for a very fascinating review of an obscure book. I just checked -- it's still in print in both French and English, and lots of used copies.

Oh thank you for this. I will certainly be looking out for it. Adding it to my TBR list at the library right now!

My favorite kind of book...obscure and wonderful...I'd hoped to start a meme of this but it hasn't happened yet.