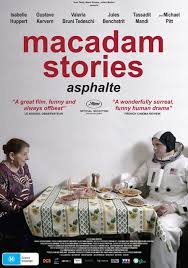 I'm not sure if two films counts as a Festival, but I was very pleased to at least be able to make it to a midweek session of one of the two films shown recently as part of the Alliance Française French Film Festival 2016 at my local cinema. Subtitled films don't get much of a run in rural Australia, so I do like to make it if I can, especially if they're French films.

I saw Macadam Stories, an intriguing move that I'd not heard a single thing about apart from the local ads. It's hard to describe really. Set in a run down apartment building on the outskirts of Paris, it predominantly features three sets of encounters between paired characters. The American astronaut and an Algerian lady of the poster, an ageing actress fallen on hard times and the teenage boy living next door, and a rather sad, lonely man who tries to woo a night shift nurse at the local hospital. It sounds odd, and it is, but it's done well and is also reasonably funny.

More impossibly, the blurb suggests that "Director and author Samuel Benchetrit brings much of his autobiographical book Asphalt Chronicles to the screen as Macadam Stories, a series of interconnected vignettes set in a public housing complex on the outskirts of Paris". Sadly Chroniques de l'asphalte does not appear to be available in translation, I can only hope that the success of the film may make it available for us in English one day.

Somehow the film makers have managed to render beauty out of the bleak and rather grim surroundings. The banlieues of Paris are a long way from the great Haussmanian Boulevards of central Paris. Samuel Benchetrit grew up in these banlieus and he treats the suburbs and their inhabitants well while exposing their sensitive underbelly at the same time. Recommended.

Or the French Bande Annonce if you prefer.

This looks sweet. I always hesitate when I see a French film claiming to be a comedy. Their idea of comedy is different than mine. But I'd be interested in this one.

It looks like my sort of movie. Thank you, Louise!