Joan of Arc. The Story of Jehanne Darc 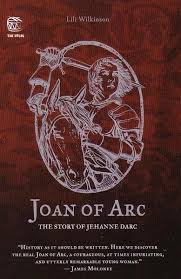 I'm really quite obsessed with Joan. It's an impossible story. Fantastic. Extraordinary. Almost surreal. But it seems to be real. So I was keen to read this book when I found out about it. Joan of Arc was Lili Wilkinson's first book. It was commissioned, and so far remains the only non-fiction book that she has written. I was very pleased to find that my library had a pack with the book and an audio version. I made the most of my recent trip to Newcastle and listened to the audiobook three times! 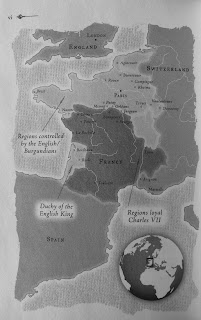 Fifteenth century France was quite a different one to the France of today. Much of Northern France was under English control. The Hundred Year war between England and France was three quarters of the way through when Jehanne Darc was born in 1412.

Legend says that when Jehanne Darc- Joan of Arc- was born at midnight on 6 January 1412, all the roosters in the village crowed, as if they were heralding a new sort of dawn.

The story starts and ends at a rather obvious place, Joan's very public death in the Old Market at Rouen.

People who watched Joan die claimed that they saw angels around her head; that a dove flew from the heart of the fire; that the words Jhesus-Maria were written in the flames; that a halo appeared above her head; that her heart remained full of blood, even when the rest of her was reduced to ashes.

Joan's" trial" was pure farce, as I suspect many medieval trials were.

The man chosen to break Joan was the Bishop of Beauvais, Pierre Cauchon. Cauchon was 60 years old, a Burgundian, and a very intelligent, cunning and cruel man. Cauchon had been promised by the English that if he could find Joan guilty, he would be made archbishop of Rouen.


Any wonder that Joan was found guilty then? She did make him work for it even though the odds were seriously stacked against her.

On the prosecution side, there sat a cardinal, six bishops, 32 doctors theology, 16 bachelors of theology, seven doctors of medicine, and 100 other clerics. On Joan's side, there was just Joan.


Once again Charles, the king that Joan put on the throne, comes under heavy criticism.

From the day Joan was captured, till the day she died Charles made no attempt to help her. The laws of chivalry stated that any noble or captain could be ransomed, but Charles never offered to ransom Joan.

Charles waited 21 years to save Joan. He then wrote a letter to the pope seeking to have an official trial of rehabilitation, which could officially annul the Trial of Condemnation where Joan was declared a heretic.


The structure of the audiobook was a bit confusing at times, as there are historical notes and asides liberally peppered throughout the narrative- which is of course obvious in the book format but not so much in the audio. Covering interesting topics such as Women in Medieval France, Saints especially Saint Michael, Catherine and Margaret who spoke to Joan, these notes give an invaluable historical background to Joan's story. Lili Wilkinson also uses many primary first hand accounts of Joan's life, actions and her trial which while fascinating, did not always slip easily into the audio either. This book is the second I've read about Joan that strongly recommends Regine Pernoud's Joan of Arc by Herself and her Witnesses. I must have it. Lili Wilkinson did a great job of telling Joan's story, I look forward to reading some of her fiction too.

I really must read my copy soon, you've got me really intrigued and inspired now.

It is only three hours on audio, so it's pretty quick, and when you've got a lot of driving to do it's an easy way to pass the time.

Like you, I now really really want to read Regine Pernoud's Joan book!