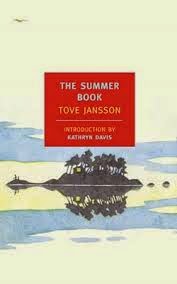 The Summer Book is my second read from Scandinavian legend Tove Jansson. I read Comet in Moominland, the first of the Moomin books, a few years ago. I didn't love it, but enjoyed having read it. The Summer Book is not a Moomin book at all, but rather a small family story set on an island off the coast of Finland. Being a child of the 70s  who has never travelled to Finland I imagine all islands off Scandinavia to be like the magical Viggso, where Abba had a writing hut.

A story of six year old Sophia spending her summer holiday on the island with her father and grandmother. Told in 22 "crystalline vignettes", the writing is lyrical


The sea lay glossy and listless in a shroud of heat, and over the coast towered the usual wall of deceitful clouds. The gulls barely lifted as they drove by.


It’s perhaps a little too gentle and lyrical for me. The story drifts along, with not a lot to hold your attention. There isn’t really a narrative thread. I kept thinking back to the introduction to my New York Review of Books edition:


-on the one hand you could say nothing happens, there is no plot, and on the other hand that everything in the book is driven by a single event, so fleetly mentioned as to be almost occult: “Sophia woke up and remembered that they had come back to the island and that she had a bed to herself because her mother was dead.”


I don’t know that this gentle story would have held my attention as a child, it barely did it now as an adult when I can admire the quality of the writing- which is lovely.  I didn’t like the later chapters much at all. I didn’t feel that I got to know the girl or her grandmother really. I didn’t get a particular sense of either of them. And I certainly didn’t get a feel for the father- perhaps he’s absent and grieving? But if it’s about the death of the mother then why not talk about it? At least sometimes. Not just once.

The ABBA reference was enough to hook me into this post Louise!

One of my colleagues has fallen in love with Jannson's adult stories - they do sound delightful.

Ah, Brona, we're all Abba tragics at heart! I haven't read any of Jansson's adult books, but I haven't fallen under her thrall as I wished I had, as I thought I would. I still have a couple of her books to read for my 1001 challenge, so can't quite give up just yet. Perhaps it will be a slow romance?