Paris has so many amazing museums. Some are world famous of course, like the Louvre or Musée d'Orsay. Some are less well known, but still worth a visit. I'd never heard of Musée Maillol, but found it on my wanderings around our neighbourhood in Paris this year. It seems every Paris neighbourhood offers up fascinating gems like this.

It was an amazing exhibition showcasing 700 years of Murano glass, with 200 pieces from public and private collections. Sadly photos were interdit, so my stealth photos are pretty ordinary. There was a very informative audio guide available in English (and French of course, and one or two other languages from memory).

Glassmaking began in Venice in the 10th century, and the industry was moved to the island of Murano in the 13th century because of fears about fire spreading from the dangerous furnaces. The Venetian glassmakers drew on the heritage of both east and west, the legacy of the Roman Empire, and also enamel painting which hadn't been seen in Europe.

My audio guide told me that the contrast of textures represented the contrast inherent in the human condition, that crows initially had white plumage, but they were turned black by too much vanity. Interesting, but it seems some folks think about ravens way too much. The audio guide also told me the black represented mourning and the red suffering and destruction. It was a very arresting artwork and much to my surprise I had worked out the artists implications before the audio guide told me!

I also got to see a glass covered table made for Napoleon. I was less impressed with the rest of the museum devoted to the afore unknown (to me at least) Aristide Maillol. The paintings were impossible to try to catch a picture of, but I did prefer his sculpture work anyway. I was running short of time at this stage, I imagine these are studies for his larger works. 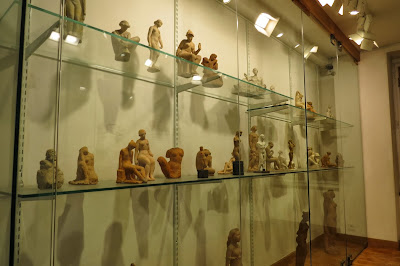 The Murano exhibition is now closed, but you can take a quick video tour here.

There is a Dallayou very close by, and I may have popped in after my artistic meanderings. Only to help Mr Wicker along on his eclair challenge mind you.

I love the idea of an eclair challenge!

The fountain of four seasons caught my attention too :-)

I love having another museum to add to my Paris list (I still really want to see the Musee de l'Assistance Publique- Hopitaux you wrote about ages ago - it was closed for renovations last time I was there *sad face*).

The eclair challenge was amazing Brona! I must post about it one day.

Vicki the Musee de l'Assistance Publique-Hopitaux was fantastic. I hope you get there one day. It's closed until 2016, (and will be opening at Hotel Dieu) so we've got time to save up to get back to Paris.

I've always been fascinated by Paris. I need to go there someday. Thanks for sharing your photos!

Not heard of this museum before, but I love the fountain - it's one of the wonderful things about Paris, that there are ornate fountains hidden away all over the place... and parks... Oh, I do love Paris... My Snapshot at http://goo.gl/Zlqhui

You keep finding fascinating spots in Paris. I'll see you again on Monday! Here's Mine

Beautiful pictures! I had never heard of the museum before!

Love your photos!
Paris is my dream vacation. Hopefully one day I'll make it there.

Hi Louise , thank you for ALL your lovely comments on my blog , I know that you love Paris and France too. I have not really been to many museums in Paris , I am too busy walking around and seeing places away from the tourist paths or in churches .. I am sure I will get into some of them one day ,, thank you for sharing Anne xo

It's really spiffy of you to post the helpful links; I learn so much when I visit you! Thanks for TWO super posts today!

I'm back. I think our local conservatory is having a glass display too. I need to go check that out. But I'd rather go to Paris. Here’s my Dreaming of France meme

This looks like a wonderful and diverse display of glass.