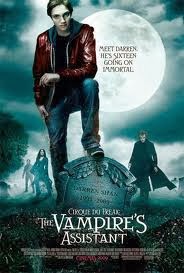 Horror is not my genre of choice. I did dabble with it in my younger years though, so have had a limited exposure. I remember a short lived passion for zombie comics as a teenager. I never did get through even one Stephen King book though. I started with The Stand, gross in the beginning, boring in the middle, never got to the end. That did Stephen King for me, and I've never been tempted again. Well, until quite recently, that JFK one sounded intriguing but is too long for me to attempt reading at the moment.

Similarly I did dabble with vampire stories as a young adult. I remember reading some of Anne Rice's vampire series way back when, but became bored with them and over time I've become less and less inclined to read vampire lit. Or werewolves. Or any of the vast numbers of books with black and red covers. The whole Twilight phenomenon passed me by, and firmed my resolve to avoid them (sad to say that Twilight is actually one of these 1001 books, and I will have to crack the cover at some stage in the future). Although I did quite surprise myself by revelling in Pride and Prejudice and Zombies a few years ago.

So anyway, I was somewhat apprehensive approaching Cirque du Freak recently. I wasn't sure that I would like this one, and worried that I would find it actively hard to read. Even the acknowledgments worried me…

And the ghoulish pupils of Askeaton Primary School (and others) who served as willing guinea pigs and braved nightmares to make this book as tight, dark and chilling as possible.


And then on the first page of the introduction:


Going to sleep, I used to imagine the spider creeping down, crawling into my mouth, sliding down my throat and laying loads of eggs in my belly. The baby spiders would hatch after a while and eat me alive, from the inside out.

Oh dear. But if the primary school kids can handle it, surely I can? A grown woman? Actually I didn't find the rest of the story as scary, or as gross, as that introduction. Cirque du Freak is the first book in what came to be a lengthy series of 16 books based on the adventures of the self titled Darren Shan. Andy Griffiths does that too, and I don't quite get it, and for some reason it bothers me when the main character has the authors name. I suppose it doesn't really matter, but I find it annoying somehow.

Darren is a regular boy, going to school, hanging out with his friends and playing soccer at lunchtime.
Darren and his best friend Steve get tickets to attend the travelling Cirque du Freak, an old fashioned freak show, still travelling, but in secret now, as they are unpopular and possibly illegal. The boys are very excited to go of course. It is a night that will change their lives for ever. I really enjoyed the freak show part of the story, the later vampire bits not so much.

Cirque du Freak turned out to be an easy, and even mostly enjoyable read for me! The chapters are short, generally only three or four pages, and the story clicks along at quite a pace. I didn't find it all that scary, mainly because as a somewhat jaded adult I don't believe in vampires or other creatures of the night. It would make a perfect read for those kids who like to be scared.