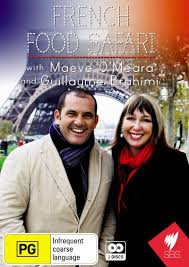 In preparation for our own French Food Safari next month we've been revisiting the captivating SBS French Food Safari on DVD. The fabulous Maeve O'Meara and wonderful chef Guillaume Brahimi lead us on an amazing tour of France via their sensational foods. We visit Paris and some regional areas over the 9 enchanting episodes. A range of Australian chefs demonstrate classic French recipes such as bouillabaisse, steak tartare and raspberry souffle between the French stories.

The vision of course combines extraordinary Parisian vistas with the incredible array of French foods. So many shots are mouthwatering. They visit many places I'd love to go, where I will go- Ble Sucre, Le Comptoir, Pierre Herme. They hang out with masters like Paul Bocuse and Guy Savoy. Take a peek here:

Along the way we learn lots of cool stuff too.

Escoffier also told us of the 3 secrets of French cooking- butter, butter and butter.

Bistro comes from the Russian word Bistra- which means hurry.

Alain Ducasse has 19 michelin stars- more than anyone else in history.

A baker, like the doctor, is someone we trust.

The Croquembuche developed by Carenne- originally in the shape of a fez, the conical shape developing later.

The French meal has been recognised by the United Nations on the World Intangible Heritage list.

The wood fired oven at Poilane has never gone out since it was first lit in the 1930s!

Finally I learnt the secret that Maeve's fabulous, distinctive tops are from Custo Barcelona.

Labels: on the tele, Paris

You are going to be so prepared for this trip Louise! Of course, half the fun of such a holiday is the anticipation. Lucky you - how many more sleeps to go?

OH a trip to Paris. The stuff dreams are made of. I can't wait to hear.
V

I am going to look for this. You need to make rsvp for Le Comptoir, except on Sunday eve. They have another restaurant across the street Les Editeurs. I have eaten at both. You must also go to Gerald Mulot on Rue de Seine. He is my favourite patisserie. I actually have one croissant left from Pierre Herme sitting on my counter. PH GM and Lauderee are all together in the 6th. PH and L. are both on Rue Bonaparte-one above St. Germain and one below. PH does not open until 10:00 am. You want to try their Isaphan croissant. I also did a tour of a bakery with Meeting the French that was great. It was only 22 euros and we had a baker explain making baguettes, croissants and escargot. The tour leader was great. Her interpreting was also very good. Where are you staying. Another restaurant that was suggested to me but I did not try was Je The Me. I had rsvp but thought they were for a different night when the restaurant was closed. When are you leaving?

I just was thinking about Blé Sucré in the 12ème next to Square Trousseau. Miam-miam!!

This series looks fascinating. I'm going to look for it and I'm so impressed with the homework you are doing ahead of time. Thanks for playing along today. Here’s my Dreaming of France meme

I think I'll have to watch this - just to tide me over until I can afford to go back. Oh, the anticipation!

OK, people, you are seriously making me want to go to Paris again!! I am slowly working on my hubby convincing him that we need to go!

I'm perpetually ready to go to Paris Brona, but am reaching a bit of a peak of preparation with this trip...A bit over 4 weeks til we leave.

Esme- how wonderful to have eaten at Le Comptoir! Did you have trouble making a reservation? On Food Safari they said they were booked out 6 months in advance. Looking at their website I wondered if that was for the special degustation nights. I hoped it was. It's hard to be a casual bistro if you have to plan to go there 6/12 before you can go. I didn't know about Les Editeurs. I'm looking forward to PH's Ispahan croissant- it's already on my list, as is his Ispahan granola- and most everything in his shop of course. We will be going to Mulot- I've never been, good to know it's your favourite. We did a meeting the french bakery tour on our last visit in 2010, it was great- the bakery we went to has since closed. We arrive in Paris late June- not long now...

It's a great series Paulita. I'm not sure how available it would be outside of Australia. Particularly on DVD. Fishpond have the DVD but I suspect it's for our region (?4), so you would need a multi region DVD player. Fishpond also have the book of the series-they do free shipping-and have an ebook I didn't know about.
http://www.fishpond.com.au/q/French+Food+Safari?rid=1019878935

Vicki it's a great one for building the anticipation, but it makes you want to be there today.

I hope your husband comes to realise that you need to go to Paris again soon.

a little Janie come lately here but thanks for posting this; I hope that Food Safari is somehow available to us here; those images were stunning and the presentation was very lively.
It's wonderful seeing your travel preps, I'm getting really excited for you.
End of June - I can hardly wait and I'm not one going.

My library doesn't have the video unfortunately, but it does have the associated book so I am off to pick it up today!

Thanks Sim. I hope you non-Australians get to watch this too. It's great.

Marg I hope you enjoy the book. I've browsed it a bit, haven't read all that much yet. But I did make Guillaume's lemon madeleines last night- they were delicious! I might need to make them again tonight....Madeleines are so easy, too.

French food dictionary was then but these days help is on hand with a neat little pocket book called The A-Z of French Food - Dictionaire Gastronomique Francais-Anglais which comes highly recommended by Hub-UK.