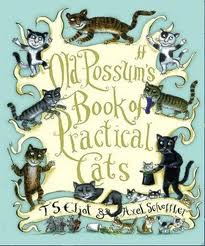 I was rather nervous approaching this book. Teenage memories of high school English class traumas live long. I remember being forced to study the poems of TS Eliot when I didn't want to, no specifics are still with me, but I remember working out that toilets is an anagram of TS Eliot such was my horror.

I didn't realise until now that Old Possum's Book of Practical Cats was the inspiration for the musical Cats (which I've never seen). It would be interesting to see how these many separate poems about individual cats comes together as one story. 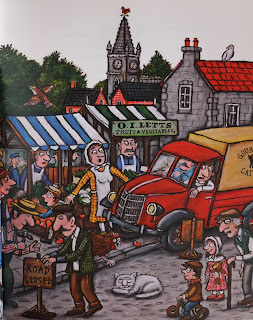 Old Possum's Book Of Practical Cats is 15 separate poems about individual cats and their peccadilloes and practices. Whilst told in verse it's not the rhyming, rolling metre of Dr Seuss, at times it does approach that. My favourites were about Rum Tum Tugger and Macavity.

The Rum Tum Tugger is a terrible bore:
When you let him in, then he wants to be out;
He's always on the wrong side of every door,


Haven't we all known a cat like that? I have. And artful old Macavity....

Macavity, Macavity, there's no one like Macavity,
There never was a Cat of such deceiftulness and suavity.
He always has an alibi, and one or two to spare:
At whatever time the deed took place- MACAVITY WASN'T THERE 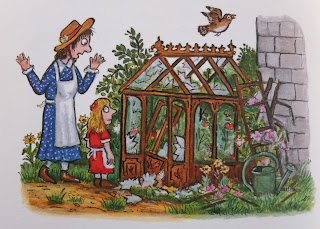 The first poem on the naming of cats is rather a delight, I learnt that cats must have three different names. And T.S Eliot takes a turn at showing us the difference between cats and dogs in The Ad-Dressing of Cats.

The poems were originally written by Eliot in the 1930s in letters to his godchildren before being published in 1939. I enjoyed a modern edition published for the 70th anniversary of the book, illustrated by Axel Scheffler, who found fame with his work with Julia Donaldson's The Gruffalo.

The problem with the musical is that they weren't allowed to add any new textual material to make it a self-explanatory story, so it is quite difficult to make head or tail (cat pun!) of any coherent narrative. What happens is anyone's guess. (The exception was the song Memory which Valerie Eliot liked enough to let in). Over Xmas I had the treat (...) of seeing Cats again in Beijing translated in Chinese! Luckily I'd seen it as a teenager (and read the poems), so it wasn't too weird. It did make me realise how incomprehensible the storyline is though!

Love, love, love this book. Read it to my son first when he was only months old. He was too young for stories but I figured he would love the sound of great words. Read it to him again when he was older, and of course to Hannah. We regularly quote it to each other, sing the songs together. The musical, as Vicki says, is disappointing in that it doesn't hang together, but with those words the songs are winners anyhow.

Oh, and the fun of The musical comes from some of the characterisation such as The Rum Tum Tugger being an Elvis-type character.

I can see my treasured copy of this book facing me on a display shelf in my office/art studio. I read this in school before the musical was produced. I saw it first in London with my girls and fell in love with Rum Tum Tugger.

It's interesting how widely known and loved this book is! All pre-musical too. I can't imagine seeing it in Chinese would help my understanding the first time round. Nice to know the musical is still going somewhere, I might get to see it eventually. Seems Rum Tum Tugger is a bit of a hit with all the ladies.

I adore this book. I saw the musical when I was a girl so the fact that the story doesn't really flow was of no concern to me. I don't think I noticed it. What I loved were the costumes, the way the actors and actresses moved in them and the music. The cats even come out into the audience.
I do wonder what I would think if I saw Cats now as an adult....although if I had the chance, I'm not sure I'd go.