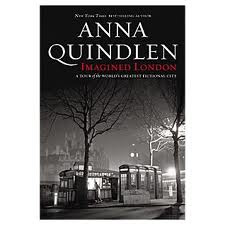 I'm going to Paris this year! Which is Tremendously Exciting. But I'm not only going to Paris, I'll also be making my first visit to London. Which is Pretty Exciting too. Major world city and all that. To someone who grew up watching British TV shows and reading English books London seems familiar, which of course it is to some extent, but also new.

Anna Quindlen, whilst American, had this same experience too. London was her favourite place in the world from her extensive reading of English literature, dating from her own childhood. She has been taken to London by many of the world's greatest authors and despite not taking her first trip until well into her forties, but her enthusiasm never waned.

For a person raised on books, walking through streets in her mind's eye, engaged in the love affairs and life losses of imaginary men and women, London is indisputably the capital of literature, of great literature and romance novels and mystery stories, too. There can be no doubt. The London of Thackeray and Galsworthy, of Martin and Kingsley Amis, of Margery Allingham and Dorothy Sayers, of Nancy Mitford and Elizabeth Bowen. The London of Conan Doyle, Oscar Wilde, and Charles Dickens.


Anna loves exploring the London of her imagination on foot, but she warns us that London is a labyrinth where even experienced residents may get lost. What hope for the hapless tourist? But it's exciting to read of Charles Dickens London, the British Museum and St Paul's. I'm looking forward to walking about and possibly getting lost in London Town too.

Anna discusses the change in novels about London over time. Older books she feels make "clear what any reader knows about London: that geography is destiny."

It is one of the central tenets of English literature: Where you live tells us who you are, or who you have become, or who you want to be.

The literature of London now reflects its modernity, as it should. It also reflects, less happily, the everywhere-is-anywhere ethos of easy air travel and effortless chain imports that has homogenised most of the developed world. Only the detective novels, perhaps needing some firm undeniable bedrock for their uncommon tales of murder, blackmail, and back channel plots, still draw heavily upon clear and specific delineations of place..... Ethnicity, too, has become its own setting, so that novels of the immigrant experience are among some of the best and most successful that modern London can offer.


I always love rather random facts, and Anna shares a few with us.

An Anti-Gallican Society was set up in 1745 to "oppose the insidious arts of the French nation".

One third of London is said to be parks and gardens.

The best selling book in America in the decade following WWII was Forever Amber. A book that I'd never heard of til now.

I like Anna Quindlen so I may look at this one. Here’s my Dreaming of France meme

How lovely to discover London for the first time (and I am green with envy about Paris - I love Paris). Just think of all the wonderful books you can read for 'research' (!) too!

It's an interesting read Paulita.

Vicki how right you are. I have so much research planned that I'd need to delay my trip by years to fit it all in... It's all very exciting.

Ahh, you know there's a special place in hell for those who flaunt their upcoming trip to Paris in front of poor unfortunates who must spend money set aside for a Trip to Italy on their son's college tuition (will this ever end?) and a new roof (sigh) and of course all the wonderful new books out in the world. Alas. Take lots of lovely photos for us.

WOW! I guess I assumed since you've been to Paris so often that you would have taken the chunnel to England before now. How exciting for you! I wish you lots of wonderful adventures getting lost in my birthplace!

This book sounds perfect for me too Louise. I spent most of 1991 in London, nannying. It gave me oodles of time to explore it's many nooks and crannies and to feel like I had gained some mastery over it by the time I left.
This is also when I discovered Forever Amber for the first time! My mum & Northumbrian godmother were a little shocked when I told them I was reading it as Forever Amber had been banned in Australia during their youth! Which shocked me!!

This book does sound very good for a person longing to visit London. The bonus is it's by Anna Quindlen. I enjoyed listening to the music about London while reading your post too.