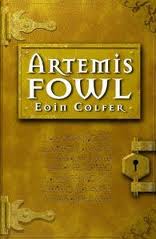 I was thrilled to start this book recently. I'd seen Eoin Colfer speak in Adelaide in May. He was astonishing. Such a funny, funny man, it was more reminiscent of seeing Billy Connolly in action than a writerly talk. With a lovely Irish brogue. You can see him in action on youtube (toned down for the kiddies).

Artemis Fowl is the first in what was to become a series of 8 books. It tells the story of 12 year old Artemis, our classic "oprhan" hero, his father has been missing for the past year and his mother is bedridden with her despair. Artemis vows to restore the family fortune back to the billionaire status at the expense of the fairies, who of course have lots of gold, and really quite sensational technology for their underground lives. As the back cover says, these are not the fairies of bedtime stories- they're armed and dangerous.

I was a bit surprised that this most Irish of tales actually starts in Vietnam, before moving on to Italy and finally to Ireland. I loved the espionage tinged with fairies, rogue trolls, and swear toads. Wonderfully grounded in the mythology of Ireland, and Ireland itself. Colfer is certainly not afraid to have a go at either.

And it was also here, unfortunately, that the Mud People were most in tune with magic, which resulted in a far higher People-sighting rate than you got anywhere else on the planet. Thankfully the rest of the world assumed that the Irish were crazy, a theory that the Irish themselves did nothing to debunk.


I also liked the occasional eco-political view scattered throughout, here Commander Root approaches the whaling vessel off the coast of Ireland:

The commander swooped low to the gunwales. It was an ugly craft, this one. The smell of death and pain lingered in the blood-swabbed decks. Many noble creatures had died here, died and been dissected for a few bars of soap and some heating oil. Root shook his head. Humans were such barbarians.


An espionage thriller complete with an evil boy genius, fairies and kleptomaniac dwarves! Sensational. A cracking pace, and lots of foreshadowing along the way. Exciting til the end. I look forward to more exciting adventures with Artemis.
Posted by Louise at 11:35

Oh! I heard the author being interviewed on Triple J once, he was full of sparkling wit and evil genius. Thanks for reminding me to look for the book/s!!!

I haven't caught up with the series for a while, but the first couple of books really were very enjoyable.

Benny and Omar is a fab kids book as well. Highly recommended.

Vicki- I'm hoping to read the second one soon. Good to hear you liked them too.

Megan, he mentioned Benny and Omar when I saw him speak in May. Isn't it a shame how when you read one book, you immediately need to read lots more extra ones.