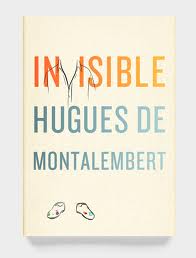 It's probably not fair to say that I'd never heard of this book. I had heard of it somehow, a newspaper reivew most likely. I had seen it once in a bookshop, had read the first few pages and been quite entranced. And then I'd completely forgotten about it. Until I found it for sale in a All Books $5 booksale in Katoomba on the weekend. And I had to have it. And then I had to consume it. Straight away.

Actually it's pretty easy to consume. A mere 125 pages. With lots of it written in short busts and lots of space on the page. The words that are there, though, are very powerful. And so beautifully written. Hugues made me pause to contemplate on pretty much every page.

I don't read all that many memoirs but I always enjoy them when I get the chance. Other people's lives are fascinating, aren't they? Their trials and tribulations. Their experience. Their philosophy. Hugues de Montalembert (and what a fabulous name that is!) has certainly had his share of trials and tribulations. At 35 he was an artist and documentary film-maker living in New York. He was attacked during a robbery, and had paint thinner thrown in his face. Overnight he became blind.


My life was based on seeing.


I am between death and birth. Dead to my past life and not yet reborn to this new one.

Hugues spends three months in hospital. He makes extraordinary progress, and somewhat incredibly he triumphs. He walks alone through the streets of New York at 3am. He travels -alone- to Indonesia and India. He dives into a pool. He rides a horse. Things that are difficult with or without sight. He wrote a book by hand, but couldn't tell when the pen had run out of ink. And yet "I had to learn to be helped... To accept being helped is probably the hardest thing."


Invisible is ultimately an uplifting and inspirational read.

When you are exhausted and you cannot reach
what you want, you become depressed.
And then you have to be careful.
Clear your mind of all negative thinking, it's too dangerous.

Like all particularly fascinating memoirs Invisible has quite a broad sweep. Hugues talks about the nature of vision and sensation. All rather fascinating, and it tied very nicely to my current in-car listening- The Brain that Changes Itself. He talks about the Rothko Chapel in Houston- I visited there last year! I was surprised to hear Hugues call the Chapel in Houston enlightening. But not surprised that during his black period Rothko was in the midst of drinking himself to death. I found the Rothko Chapel disturbing, not enlightening, and only stayed very briefly. And best of all I learnt that there is a Disco Bay in Greenland! How can you not want to go there? I want to go there. It looks amazing. And it's called Disco Bay....

I love the label you laid on this book. It should be a weekly meme.

Thanks Deb, I've been using that label for a while. It would make an interesting meme wouldn't it? I wonder how you do that? I think it's beyond my blog knowhow.