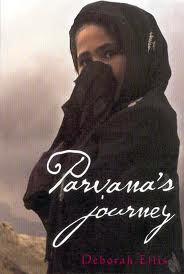 Parvana's Journey is a harrowing tale of children living in Afghanistan under the Taliban. This is not the sort of story that I would normally seek out. Which is one of the great things about reading from a list that you didn't create yourself- your boundaries are stretched.

Deborah Ellis is a Canadian writer, she is a mental health counsellor and anti-war campaigner. Her books often deal with children displaced by war, poverty or disease. They have been very successful. She has donated all her royalties from Parvana's Journey, and I presume at least some of her other books, to the charity Women for Women in Afghanistan.

Parvana's Journey is actually the second in a series of 4 books depicting Parvana's life- Parvana (also titled The Breadwinner), Parvana's Journey, Shauzia (aka Mud City), My Name is Parvana. All rather confusingly titled I think.

Parvana's Journey starts with 11 year old Parvana struggling to find enough rocks to bury her father. Her family had become separated during the war in Afghanistan in the late 90s- she was with her father; her mother with her 3 siblings are somewhere else. But Parvana's father becomes increasingly frail, and dies in an unfamiliar village. Parvana is left on her own, and journeys on in a rather random way. She doesn't know where to go, or who to trust to help.

Given the setting some of the content is rather depressing. The senselessness and arbitrary nature of death in war. Hunger. Poverty. Disease and dispossessed people. In fact all the flavours of human suffering.

"My uncle had an orchard," Asif said. "He grew peaches, mostly, and rows of berry bushes. He accused me of stealing berries from him. Is it stealing to take food when you're hungry?"

When everything was quiet except for the crying of people who had lost loved ones, and the screaming of those who had been injured, the children got up and started walking again. They couldn't help anyone, and no one could help them.

Is this it? She wondered. Have I come so far, just to be here? Is this really my life?

I think as an adult reader the earnestness of purpose of the writer, and the sociopolitical view is a bit too obvious. Which isn't to say that the book is bad, I enjoyed reading it. I was just aware that I was being taught something. Not that it's a bad lesson, it's not, but I can see the teaching. That may not be as apparent to younger readers who have not sat through quite as many news broadcasts as I have. I'd love to share this book with my 11 year old son but would struggle to convince him that there might be dragons, time lords or magic within the covers.

Thanks for your insights into this one Louise. I't can be difficult for issue based books not to sound preachy...but To Kill A Mockingbird managed it, so it's not impossible (although that may be setting the bar rather high!!)

Wow, that is setting the bar rather high indeed! It is a difficult balance, and it always shows.

I did notice that, though our city public library has three of the four books, none of the books looks like it has been checked out before me.

Hello!
Thank you so much for visiting my blog : The Bea's Knees. Loved your blog a lot, especially because I love France and your posts brought back so many memories! Following you now!

If you liked The Bea's Knees, please do visit again, and please follow! Thank you!
Bea
http://beashealthliving.com/